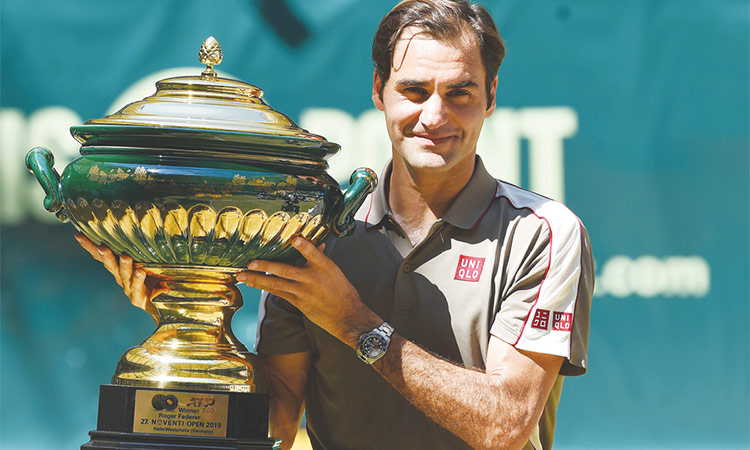 Roger Federer poses with the trophy after winning the Halle Open final against David Goffin (unseen) in Halle on Sunday. Agence France-Presse

Roger Federer said he was ready for Wimbledon after waltzing past Belgium’s David Goffin in straight sets to win a record-extending 10th title at the ATP event in Halle on Sunday.

“It’s unbelievable. I never thought when I first played here that I would win 10 titles,” said Federer.

“Often when it went well for me here, I also had successful Wimbledons, so this sets me up nicely.”

The Swiss star is chasing a ninth Wimbledon crown in London next month as he looks to extend and defend his record of 20 career majors.

The win at Halle means that Federer will be second seed ahead of Nadal at the All-England Club, and the Swiss said that his performances at the tournament would boost his confidence.

“It’s always good at my age to prove myself that I can last five matches in six days and tough ones along the way,” he said.

Federer endured a rough ride in the early rounds in Halle, battling to hard-fought, three-set victories over Jo-Wilfried Tsonga and Roberto Bautista Agut.

Things got easier in the latter stages as he thrashed Andy Murray’s new doubles partner Pierre-Hugues Herbert in the semi-finals before dispatching Goffin on Sunday.

Federer held off three break points early in the first set before prevailing in the tiebreaker.

An unsettled looking Goffin then gifted Federer the opening game of the second set with a double fault on break point.

From there, the Swiss never looked back, breaking Goffin twice more on his way to a 10th Halle title.

“I thought David was actually better than me in the first 10 games,” said Federer.

Goffin added: “I thought I started really well, there was great intensity in the first set.

“I had opportunities, but you have to take them against Roger. This guy is pretty good.”

It is the first time Federer has reached double figures at any individual tournament.

He has triumphed eight times at both Wimbledon and the Dubai Open, and has won his home tournament in Basel on nine occasions.

“I’ve never won a tournament 10 times before, so I will remember forever that I did so here in Halle.”

“I didn’t think about how it would feel until it was all over.” Feliciano Lopez became the oldest Queen’s singles champion on Sunday when the 37-year-old Spaniard defeated Frenchman Gilles Simon in a thrilling three-set clash, 6-2, 6-7 (4/7), 7-6 (7/2).

Lopez, the first wildcard to win the key Wimbledon warm-up event since Pete Sampras in 1999, is also the lowest-ranked player to claim the title at 113 since 108th-ranked Australian Scott Draper in 1998.

While Lopez has had an exhausting week -- he still has to play the doubles final with Andy Murray -- 34-year-old Simon also played inspired Tennis despite all his matches going to three sets.

However, he just fell short of becoming the first Frenchman to win the title.

Lopez was the second 37-year-old to win an ATP tournament on Sunday after Roger Federer claimed his record-extending 10th Halle title.

Ashleigh Barty became only the second Australian woman to top the world rankings when she won the Birmingham WTA title on Sunday, beating Julia Goerges 6-3, 7-5.

The 23-year-old French Open champion emulates Yvonne Goolagong-Cawley, who held it for a fortnight in 1976. Barty displaces Japan’s Naomi Osaka as women’s world number one.

Barty showed little sign of the arm injury — the same one she had going into the French Open — which saw her pull out of the doubles on Saturday where coincidentally she was partnering Goerges.

Barty saved two break points early in the first set but she made no mistake when she was offered the opportunity -- Goerges putting a backhand wide to give the Australian a 4-2 lead.

Barty closed out the set without further ado -- the pick of her shots a delightful lob into the far corner which Goerges tried valiantly to get back but it dropped short of the net to give her a 5-2 lead.

Goerges, leading 4-3, took Barty’s next service game to deuce with a superb volley, but the Australian extricated herself from trouble and levelled at 4-4. Barty had a break point in the next game but Goerges found the wherewithal to fight back and win the game to go 5-4 up.

Goerges had a set point in the next game but Barty, showing her championship winning mentality, saved it with an ace and then held serve to make it 5-5.