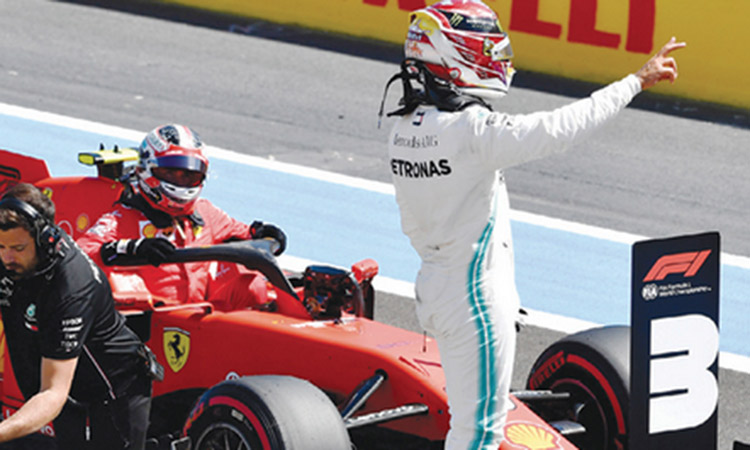 The five-time world champion, who had struggled to match the Finn’s pace in the previous two practice sessions, reeled off a fastest lap in one minute and 28.319 seconds to beat him by 0.286 seconds.

It was the 86th pole of his career for Hamilton, who won last year’s race from pole, and a record-increasing 63rd front-row lock-out for Mercedes. Hamilton has taken 60 of his poles with Mercedes.

It was a master-class from the dominant Silver Arrows team while their rivals laboured in pursuit, with Monegasque Charles Leclerc taking third for Ferrari ahead of Max Verstappen, fourth for Red Bull.

British rookie Lando Norris impressed with a fine effort to take fifth ahead of his resurgent McLaren team-mate Carlos Sainz and, surprisingly, a despondent Sebastian Vettel finished down in seventh in the second Ferrari after a gearbox issue during Q3.

Daniel Ricciardo was eighth for Renault ahead of Frenchman Pierre Gasly in the second Red Bull and Antonio Giovinazzi of Alfa Romeo.

“It’s not an easy track,” said Hamilton. “It’s very technical and Valtteri has been very quick all weekend. I’ve been chipping away and the last two laps were the ones.”

Bottas said: “I think Lewis had a really good lap. It’s between super close between us all weekend and it’s about fine details.”

A happy Leclerc said: “At the end, I am pretty happy with my lap and unfortunately it wasn’t enough! A good start will be very important tomorrow.”

On an afternoon of searing heat and a gusty wind at the remote Le Castellet circuit, the track temperature was 55 degrees as the session began and the air was 30, conditions that ensured plenty of complaints about the smooth, if slippery, asphalt surface.

As he had on Friday afternoon and Saturday morning, Bottas was quick to set the pace and topped Q1 ahead of Hamilton with Leclerc a close third.