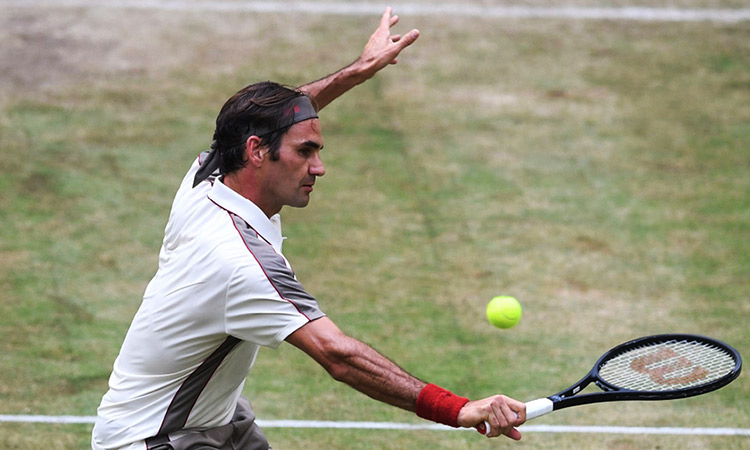 Roger Federer’s Wimbledon preparations continue to run smoothly after he reached the final of the ATP event in Halle for a 13th time with a 6-3, 6-3 win over Andy Murray’s new doubles partner Pierre-Hugues Herbert on Saturday.

World number 43 Herbert, 28, struggled in his first-ever meeting with 20-time major winner Federer, who is chasing a record-extending tenth title in Halle this year.

The straight-sets victory provided welcome respite for Federer, who was forced to battle through gruelling three-set encounters with Jo-Wilfried Tsonga and Roberto Bautista Agut earlier in the week.

The 37-year-old Swiss will face David Goffin in the final, after the Belgian fought to victory over rising Italian star Matteo Berrettini earlier on Saturday.

Goffin, 28, who also knocked out home favourite and world number five Alexander Zverev in the last eight on Thursday, beat Berrettini 7-6 (7/4), 6-3 to reach his first ATP Tour final since 2017.

The Belgian proved one challenge too many for in-form 23-year-old Berrettini, who has risen to 22 in the world rankings this season and claimed his second ATP title of the year in Stuttgart last week.

Goffin has lost seven of his eight meetings with Federer in the past, beating him in three sets at the 2017 ATP Finals in London.

Meanwhile, Gilles Simon is one victory away from becoming the first French winner of Queen’s after coming from a set down to beat a struggling Daniil Medvedev 6-7 (4/7) 6-4, 6-3 in their semi-final on Saturday.

The 34-year-old veteran showed little sign of having played the longest match at Queen’s since 1991, a marathon of over three hours in Friday’s quarter-final with compatriot Nicolas Mahut.

Fourth seed Medvedev’s cause was not helped by a painful right shoulder and lower in lower left back, which he was constantly rubbing.

Simon will bid to go one better than the last Frenchman to appear in a Queen’s final -- Jo-Wilfried Tsonga -- who lost to Andy Murray in 2011.

Russian Medvedev raced into a 3-0 lead in the first set tie-break and won 7-4 by putting away a Simon drop shot.

In the second, Medvedev iced his right shoulder during a changeover with Simon leading 5-4.

The Frenchman then broke with some superb Tennis to level the match.

Medvedev put Simon’s second serve under pressure early in the deciding set and had break points in the first two games but the Frenchman saved both, the second after a remarkable 49-shot rally.

The Russian then began feeling the lower part of his back and remonstrating with his team in the crowd. Simon was playing some sparkling Tennis, regardless of Medvedev’s travails, and producing a sublime cross-court forehand to bring up two break points, leaving Medvedev on the ground and clambering gingerly to his feet.

Simon, though, could not take advantage and Medvedev fought back to level at 2-2.

However, the Frenchman made no mistake the next time he had a break point, moving to a 5-3 lead before serving out the match.

French Open champion Ashleigh Barty is one win away from becoming the first Australian to be crowned women’s world number one in 43 years after reaching the final of the WTA event in Birmingham on Saturday.

Barty beat Barbora Strycova 6-4, 6-4 in the Birmingham semi-finals to advance to her third final of the season and extend her winning streak to 11 consecutive matches.

The 23-year-old hit 11 aces and 24 winners and did not drop her serve once in one hour and 24 minutes on court against Strycova.

Standing in the way of Barty overtaking Japan’s Naomi Osaka at the top of the WTA rankings is a familiar foe in the shape of her doubles partner Julia Goerges, who beat Petra Martic 6-4, 6-3 in the other semi-final.

Barty would be the first female Australian world number one since Evonne Goolagong Cawley.

John Newcombe, Pat Rafter and Lleyton Hewitt are the three Australian men to have topped the Tennis world since rankings were introduced in 1973.

Barty’s last defeat came on May 16 against Kristina Mladenovic at the Italian Open in Rome.

Success in Birmingham would be her third tournament win in a superb three months after victory at Roland Garros and at Miami in March.

But Barty is blocking out the thought of sitting on top of the world for now, preferring to focus on her game-plan for facing German eighth seed Goerges.

“I keep it very simple. I don’t focus on them at all. They are things I can’t control necessarily,” Barty told reporters after her victory.

“I have to try and do what I can do and that is prepare and do as best that I can tomorrow and try and play a good Tennis match and if I win, it’s a bonus.”