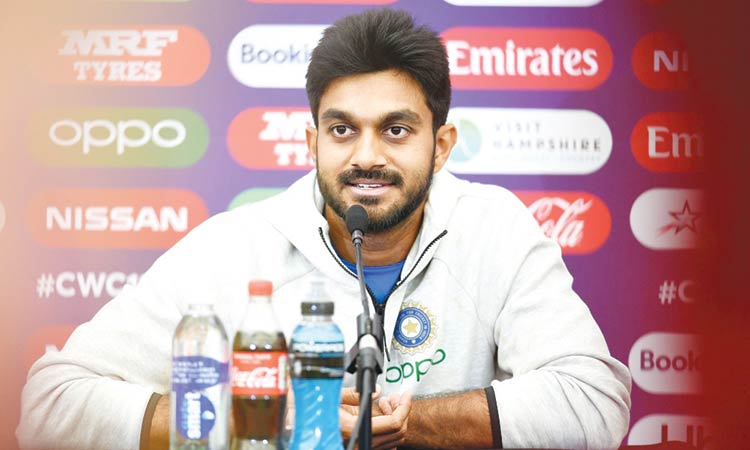 India’s Vijay Shankar addresses a press meet in Southampton, ahead of their Saturday’s match against Afghanistan. Agence France-Presse

With three wins in four matches (including a no result), Team India will be looking to come out with yet another commanding performance and continue their winning run in the ongoing World Cup when they take on Afghanistan at the Rose Bowl here on Saturday.

The Men in Blue have so far been able to put on complete performances in each of their three games against South Africa, Australia and Pakistan. While the top-order has consistently given good starts, the bowlers, aided by some brilliant fielding, have backed it up with disciplined performance.

Rohit Sharma has been in imperious form and has scored two hundreds and a half-century. Virat Kohli has also looked in his usual hard-hitting form and KL Rahul has been in fine touch too.

However, injury to key players like Shikhar Dhawan and Bhuvneshwar Kumar has led the team management to worry a little.

Dhawan has been ruled out of the tournament with a fractured thumb and stumper Rishabh Pant has been inducted into the squad. Bhuvneshwar is suffering from a hamstring injury and has been sidelined for the next two-three games.

While, Rahul replaced Dhawan in the opening slot against Pakistan, Mohammad Shami will in all likelihood play his first match of the ongoing World Cup against Afghanistan.

There is also some doubt over Vijay Shankar’s inclusion, who was in pain after being hit on his toes by a Jasprit Bumrah yorker during India’s training session on Wednesday.

Afghanistan, on the other hand, have just not been unable to recreate the magic they did in the World Cup Qualifiers and Asia Cup last year, and have faced five defeats in as many games so far.

They have been below par with both bat and ball and the sloppy fieldwork has also not helped their cause.

Rashid Khan has not been able to find any rhythm and has gone for plenty without taking many wickets in the ongoing tournament so far.

Thus, Afghanistan would hope that their star cricketer comes out with a much improved performance and help them earn their first points in the showpiece event.

Shankar meanwhile says India believe they have room for improvement in every World Cup game as they prepare to face minnows Afghanistan.

Virat Kohli’s side have made an unbeaten start to the World Cup, with three convincing victories and one washout so far.

Though India’s next test is likely to be their least demanding of the group stage against an Afghanistan team that has lost all five of their games, India all-rounder Shankar insists the number-two ranked ODI team have a professional approach for every game and will look to keep improving against bottom of the table Afghanistan.

“Being a professional, it’s very important to keep improving and get better every day,” Shankar told reporters in Southampton on Friday.

“That is the only thing which each and every individual thinks about. If you can keep getting better, we can set ourselves better standards every game.

“It’s not about against whom we’re playing. I think it’s about how we play as individuals.”

The 28-year-old impressed on his World Cup debut against Pakistan on Sunday, taking two wickets following his inclusion in the XI in place of Shikhar Dhawan, who has been ruled out of the team with a fractured finger.

“I know I can bowl a lot better than what I am bowling even now,” said Shankar, who has played 10 ODI matches since making his international debut against Australia in January this year.

“I always have a good chat with my bowling coach (Bharat Arun) and try and get better each and every day and look to get something from him which can help my bowling.”