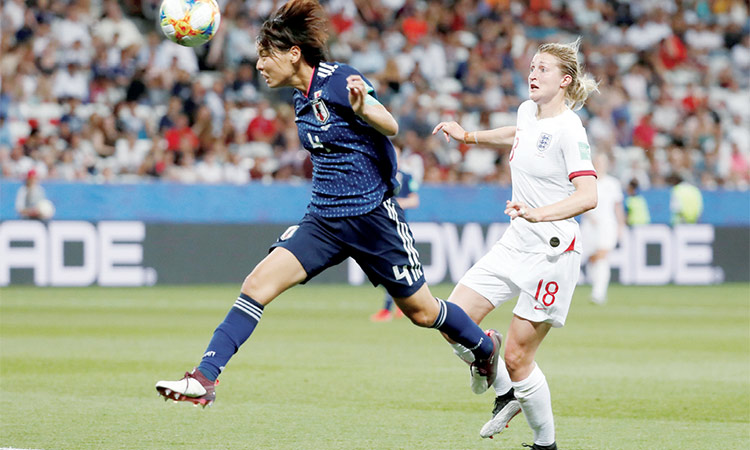 Two goals by Ellen White saw England beat Japan 2-0 and secure top spot in their group at the women’s World Cup on Wednesday, but Scotland were eliminated from the tournament in dramatic, heartbreaking fashion.

England were already through to the last 16 before facing the former winners Japan in Nice, yet White’s double allowed them to clinch first place in Group D with a maximum nine points.

Georgia Stanway released White to slot home the opener in the 14th minute, and the same player wrapped up the win six minutes from time with a clinical first-time finish from Karen Carney’s pass.

The result allowed England to gain a measure of revenge for their agonising 2-1 defeat against the same opponents in the semi-finals four years ago.

“We’ve got another clean sheet, we’ve won another game, we’ve played three and won three, and we’re just where we want to be, in the last 16, and ready to attack the business end of the tournament,” said England coach Phil Neville.

His side were deserving winners despite Neville making eight changes following last Friday’s 1-0 win over Argentina, with White among the players returning.

“When you make more than five (changes) you suffer with the rhythm and the flow and I think we did that tonight,” he said.

“We knew at times we were going to suffer but I think it was a game we needed to have to keep us focused.”

England will now head to Valenciennes in northern France for a last-16 tie on Sunday against a third-placed side.

Their opponents are unknown with China, Cameroon, New Zealand, Chile and even Thailand all potential opponents.

The permutations are less complicated for Japan, but the Nadeshiko -- World Cup winners in 2011 and runners-up in 2015 -- will have a stiffer-looking test in Rennes against either the Netherlands or Canada.

Asako Takakura’s youthful team finished the group phase with just one win, and another run to the final appears a long shot at this stage.

“I wanted to rest some of my players, so I rotated the squad. Now we need to come together and prepare for the next match,” coach Takakura said.

Scotland looked to be going through as one of the best third-placed sides when Erin Cuthbert’s 69th minute gola put them 3-0 up against Argentina 3-0 at the Parc des Princes in Paris.

Added to earlier strikes by Kim Little and Jen Beattie it seemed to have assured a first win at their debut World Cup, along with progress to the knockout phase, something the nation’s men’s team have never managed.

But Milagros Menendez replied with Argentina’s first goal of the tournament in the 74th minute and then Florencia Bonsegundo’s shot went in off goalkeeper Lee Alexander to set up a grandstand finale.

With two minutes left, after an agonising VAR review, Argentina were handed a penalty.

Alexander saved Bonsegundo’s tame first effort, but VAR caught the goalkeeper straying off her line and the Argentine converted her second effort in the fourth minute of stoppage time.

The draw left Scotland on one point, bottom of Group D and eliminated.

“We gave it our all for 70 minutes of the game.

“We were very good but we didn’t manage to see the game out, but at this moment in time we feel hard done by,” said Scotland’s disconsolate coach, Shelley Kerr.

“There were certainly a few decisions again that didn’t go our way.

“This is a World Cup and you need the officials to make the right calls. It is really bitterly disappointing.”

Argentina have two points and can only advance as one of the four best third-place finishers if Thursday’s final group games between Cameroon and New Zealand in Group E and Chile and Thailand in Group F both end in draws.