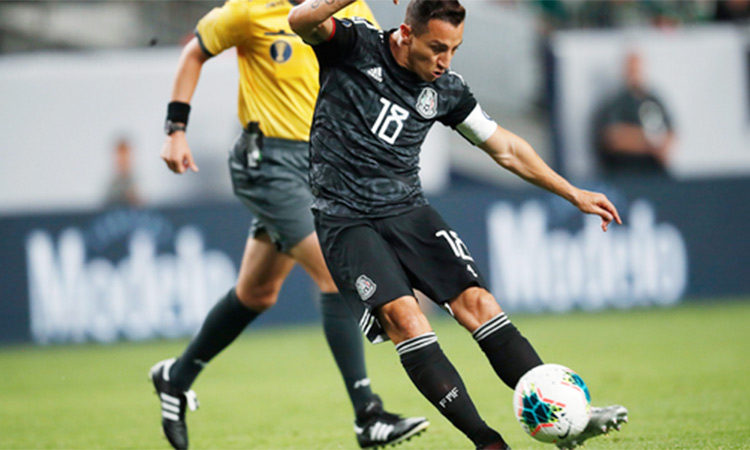 Andres Guardado scored two second-half goals as Mexico went top of their CONCACAF Gold Cup group with a 3-1 victory over Canada on Wednesday.

Guardado scored from long-range in the 54th minute added another 13 minutes from time to give the Mexicans a second straight win at Invesco Field in Denver, Colorado, after they had thrashed Cuba 7-0 in the Group A opener.

Roberto Alvarado opened the scoring in the 40th minute as Mexico, without star players Javier Hernandez, Hector Herrera and Carlos Vela, made it two wins out of two on their quest to lift the Gold Cup for an eighth time.

Lucas Cavallini pulled one back for the 2000 CONCACAF champions Canada in the 75th minute when he latched on to Jonathan David’s pass and slid the ball under goalkeeper Francisco Ochoa.

But two minutes later Guardado sealed the victory when his shot deflected up off the foot of Canadian defender Alphonso Davies and into the net.

Canada had beaten Martinique 4-0 in their first match in the continental championship for North American, Central American and Caribbean sides.

But Martinique kept their hopes of advancing to the knockout stage alive while eliminating Cuba with an emphatic 3-0 win in Denver, Colorado on Wednesday. Goals from Joris Marveaux, Stephane Abaul and Kevin Fortune handed Martinique their first win of a tournament that crowns the continental champion of North America, Central America and the Caribbean.

Martinique went ahead in the 45th minute when Marveaux headed in from a corner.

Both teams had chances in a first half that was a battle of the goalkeepers but Martinique seized control after the break and could have added to their lead in the 59th minute had Mickael Biron’s penalty not sailed above the crossbar.

An Abaul header off another corner secured Martinique’s second goal in the 70th minute while Fortune put the game away 15 minutes later when he slotted from in close shortly after Cuba’s Erick Rizo was sent off.