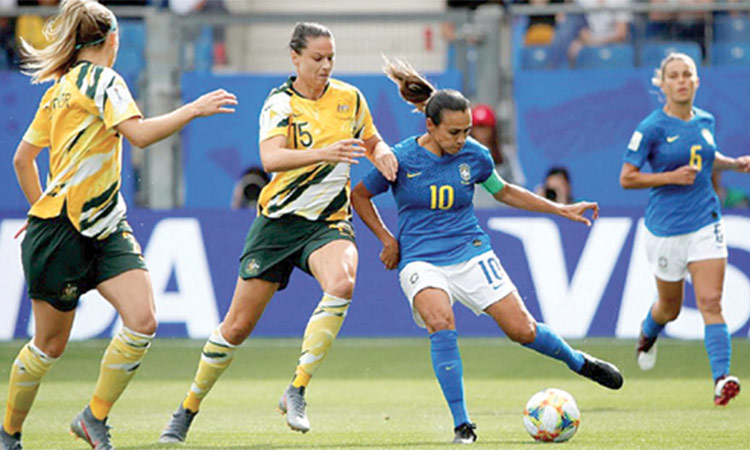 Emily Gielnik (2nd left) is one of four players in the Australian squad to have played club soccer in Norway. File / Agence France-Presse

Australia’s Norwegian connection will do all they can to give their coaches the inside track ahead of the last-16 knockout clash at the women’s World Cup on Saturday, according to Matildas forward Emily Gielnik.

Gielnik is one of four players in the squad to have played club soccer in Norway, while rookie defender Karly Roestbakken’s father Jack is Norwegian.

“It is a little bit of an advantage that we know some of them and know their style of play,” said Gielnik, who played for Avaldsnes IL in 2017 alongside national team-mates Chloe Logarzo and Gema Simon. Tameka Yallop played for Klepp IL.

“We can help the coaching staff out with that.”

The Matildas qualified for the knockout phase with a 4-1 victory over Jamaica on Wednesday in Grenoble to finish second in Group C and set up the last-16 clash with the Scandinavians in Nice.

Norway finished second in Group A behind France after beating South Korea 2-1 and Nigeria 3-0.

“They’re not a bad team,” said Gielnik of Norway.

“They’re quite tidy. (But) we’re a better team and we just have to make sure it’s not one of those World Cup upsets.

“At the end of the day it’s just going to be the team that wants it more, I think.”

The Matildas had the benefit of a private jet for the short flight to Nice from Grenoble in the foothills of the Alps, and Gielnik said the team were taking advantage of that luxury and had held a recovery session on the beach on the French Riviera.

“The main thing for us is recovery,” she said.

“It’s a short turnaround. We will be on the pitch tomorrow and before you know it’s match day minus one.”