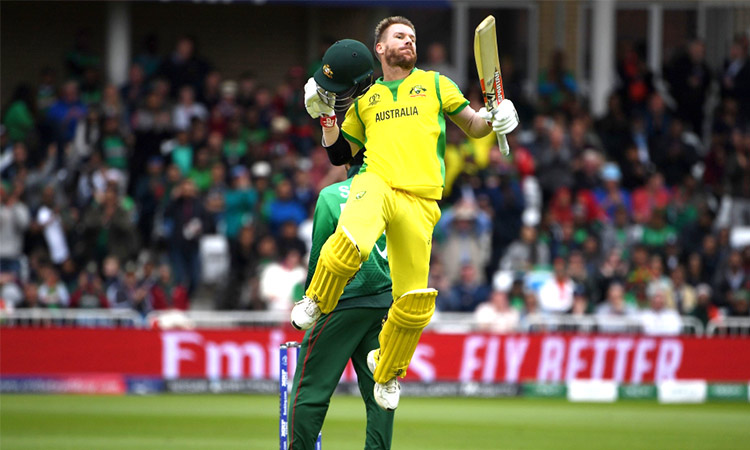 David Warner's century paved the way for Australia to beat Bangladesh by 48 runs at Trent Bridge on Thursday as the reigning champions went top of the World Cup table.

Warner made Bangladesh pay for dropping him on 10 with an innings of 166 — the left-handed opener's second century of the World Cup — in a total of 381-5.

Bangladesh, needing to surpass Ireland's World Cup record chase of 329-7 against England in 2011, struggled to keep up with the required run-rate.

Mushfiqur Rahim hit a fine 102 not out but the wicket-keeper's entertaining fifth-wicket stand of 127 with Mahmudullah (69) came too late to alter the course of the match as Bangladesh finished on 333-8 after their 50 overs.

Defeat left them in fifth place, with only the top four from the 10-team round-robin group stage qualifying for the semi-finals.

"It's a great achievement but for us it's about getting these two points and moving on to Lord's," said man-of-the-match Warner.

"You've got to adapt and it's about momentum, so far things are working well," he added. "It was a tad slow, the wicket, but it was a grind for the bowlers, it was very difficult for the bowlers."

The 32-year-old Warner, the highest run-scorer of the tournament, with 447 runs, is back to his devastating best for Australia after completing a 12-month ban for his role in a ball-tampering scandal in South Africa.

Soumya Sarkar took 3-58 from eight overs but, by the time the sixth bowler came on, Australia had already benefited from plenty of wayward deliveries from an attack missing paceman Mohammad Saifuddin, who was ruled out with a back spasm.

Finch, fresh from his 153 in a win over Sri Lanka, set the tone by launching Bangladesh captain Mashrafe Mortaza — the sole survivor on either side from the Tigers' shock 2005 ODI victory over Australia in Cardiff — for six over cover.

But the opener was out soon after completing his eighth fifty in 11 ODI innings when he guided a rising Soumya delivery to Rubel Hossain at short third man.

Khawaja fell in sight of a hundred when he bottom-eged a pull off Soumya and Mushfiqur dived forward to hold a good catch.

Trent Bridge has twice seen England set a record innings score in a one-day international, including the current mark of 481-6 against Australia last year.

Bangladesh did not help their own cause when a chaotic mix-up between Tamim Iqbal and Soumya saw the latter run out by Finch's direct hit from mid-on.

Shakib Al Hasan, fresh from his match-winning century against the West Indies, then fell for 41 when he chipped a Marcus Stoinis slower ball to Warner at mid-off.

Tamim played on to Mitchell Starc for 62 and the left-arm fast bowler's first ball to Liton Das saw the new batsman struck on the helmet by a bouncer but he batted on after receiving on-field treatment.

Das was eventually lbw to leg-spinner Adam Zampa but the experienced Mushfiqur continued to give the massed ranks of Bangladesh fans in the crowd plenty to cheer.

There were more roars of approval when Mahmudullah launched Zampa for a 95-metre straight six before he holed out.

And the crowd rose to their feet when Mushfiqur completed his seventh ODI century, off 95 balls including nine fours and a six.