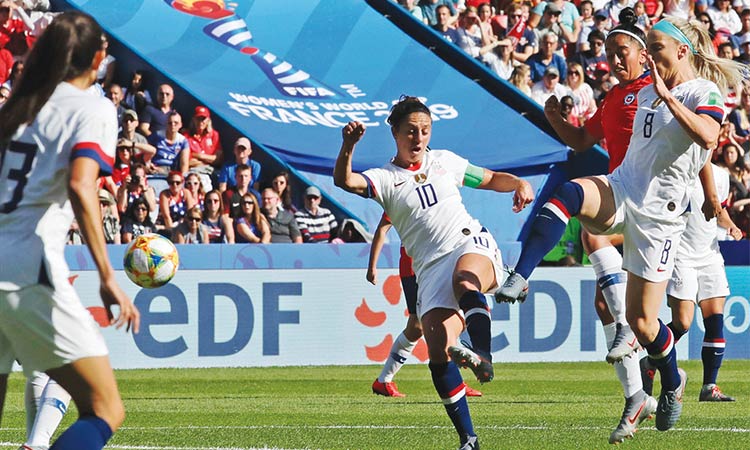 That the USA’s winning margin was nowhere near their record-breaking 13-0 hammering of Thailand in their opening game was largely down to the heroics of Chile’s brilliant goalkeeper Christiane Endler, but it was still a one-sided victory for the holders in Paris.

Sweden, meanwhile, beat Thailand 5-1 in Nice and must now defeat the holders in Le Havre on Thursday if they are to finish first in Group F.

Lloyd had been eager to show she was still worthy of a starting place in Jill Ellis’s US side and she came into the line-up as one of seven changes. She netted twice in the first half either side of a Julie Ertz goal, as the US followed the Swedes in advancing from Group F.

“This is the best version of me in my career. Whether you put me up top or in the midfield, I can do it,” said 36-year-old Lloyd, whose goals at the Parc des Princes saw her overtake the mark of Birgit Prinz, the German who netted in five consecutive matches at the 2003 World Cup.

“There is no doubt in my mind that I am just going to stay ready, stay focused, because you never know what can happen,” she said of the prospect of keeping her place.

Hat-trick hero in the 2015 final, Lloyd squandered the chance to get a third goal in this game at the Parc des Princes as she missed a late penalty. She had earlier hit the woodwork twice.

“I think the important thing for us is that players are ready to do any role and the fact she has now scored three goals is awesome,” said coach Jill Elis, who has already given minutes to all the outfield players in her squad over the two matches so far.

“She was fantastic, ready, energised. I don’t think she could be in a better spot.”

Alex Morgan and Megan Rapinoe were among those rested completely by Ellis as the US put on a show to delight their fans, who made up the majority of the 45,594 crowd.

Lloyd volleyed in the opener in the 11th minute and headed home from a Tierna Davidson corner in the 35th minute for her 113th international goal. In between, Ertz headed home the second.

The US pushed for more goals in the second half only to be denied time and time again by the brilliant Endler, who Ellis called “world class” and “one of the best shot-stoppers I have ever seen”.

The Paris Saint-Germain ‘keeper’s save from a Christen Press header was the pick of the bunch, while substitute Jessica McDonald curled a shot off the post.

“It is difficult. On the one hand we lost, on the other hand I am satisfied with the way I played,” said Endler.

Perhaps unsettled by the quality of Endler, Lloyd sent her penalty wide in the 81st minute after a Yessenia Huenteo foul on Allie Long was spotted after a VAR review.

In Nice, Linda Sembrant, Kosovare Asllani, Fridolina Rolfo and Lina Hurtig scored for Sweden before Elin Rubensson sealed their win from the penalty spot late on.

Just before that, Thailand had pulled one back through Kanjana Sung-Ngoen, leading to emotional scenes of celebration for a side who had been so humiliated by the US.

“This one goal made us laugh, made us smile and makes us happy,” said the Thailand coach, Nuengruethai Sathongwien.

“Chile will be difficult next but getting a point at this World Cup is what we want to do.”