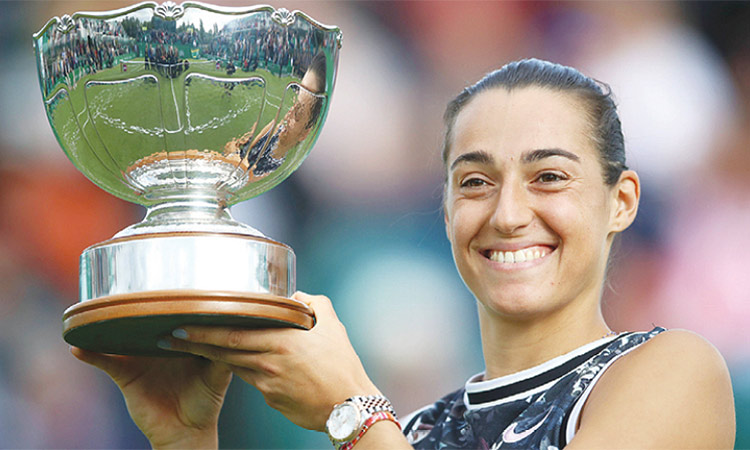 Caroline Garcia holds the trophy after beating Croatia’s Donna Vekic in the final of the Nottingham Open on Sunday. Associated Press

France’s Pierre-Hugue Herbert sprung a minor surprise on the first day of the ATP tournament in Halle on Monday as he beat veteran compatriot Gael Monfils in straight sets.

There was disappointment for the home crowd as German veteran Philipp Kohlschreiber suffered a second first-round defeat on home soil in the space of a week against American Steve Johnson.

Kohlschreiber, who also lost in the first round in Stuttgart last week, lost 6-3, 6-3 and missed the opportunity to set up a potential second round clash with compatriot Alexander Zverev.

Elsewhere, Moldova’s Radu Albot came from behind to win 5-7, 6-1, 6-4 over Australia’s Matthew Ebden.

Garcia needed to polish off her semi-final against American Jennifer Brady on Sunday morning 4-6, 6-3, 6-3 after a rain caused havoc with the schedule over the past week in the Midlands.

The heavy load appeared to take its toll as Croatian Vekic romped through the opening set of the final. However, Garcia composed herself to break back twice in the second set before closing it out on a tie-break. The deciding set also went to a tie-break without a single break of serve, where again Garcia prevailed 7-4 to take her seventh career singles title.

All the while, Perth was Monday named as host city for the Fed Cup final between Australia and France later this year -- the first to be held Down Under for four decades.

The women’s team showdown on November 9-10 will be played on hardcourts at the west coast city’s RAC Arena, Tennis Australia announced.

Ashleigh Barty is expected to lead seven-time champions Australia in their first home Fed Cup final since 1978. They last won the title in 1974.