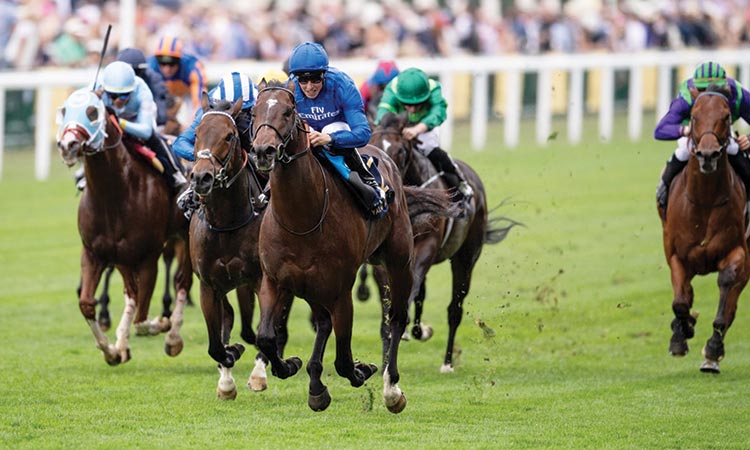 Staged over five days of six races each, Tuesday through Saturday, the action commences at 2:30 pm (5:30 pm UAE time) with the final fixture going off at 5:35pm (8:35 pm UAE time), including eight Group 1s.

Dubai-connected horses will be in action throughout, giving UAE racing fans plenty for which to cheer.

The action kicks off at full tilt on Tuesday, with three Group 1 affairs and no less than 11 declared with 2019 Meydan form, including Geoff and Sandra Turnbull’s Dubai Turf sponsored by DP World (G1) third-place finisher Lord Glitters.

The star of the day for UAE racing fans is Godolphin’s Al Quoz Sprint sponsored by Azizi Developments (G1) champion Blue Point (above), a three-time 2019 Meydan winner who starts as the co-favourite for the £500,000 King’s Stand Stakes (G1) over 1000m—a race he won last year in impressive style.

Once again he takes on the mercurial Battaash, wearing the Shadwell blue and white of Sheikh Hamdan.

The rivals are considered two of the top sprinters in the world, making this one of the most anticipated rematches of the year. They will be challenged by the likes of late-charging US sprinter Imprimis, champion Mabs Cross and promising sophomores Soldier’s Call and Sergei Prokofiev.

Dubai-based Phoenix Thoroughbreds looks to knock off all of the favourites with longshot and 2018 Royal Ascot winner Signora Cabello, from the yard of John Quinn.

“This is what racing wants—you want these good horses clashing. If Battaash and Blue Point turn up with their A-game, it’s going to be a great race. I know Battaash has taken over as favourite and justifiably so on his reappearance win—he was very impressive—but I’m not frightened of taking him on again, that’s for sure.”

A mere 1¾ lengths astern world-class filly Almond Eye that day, the hard-trying grey should be respected in this spot after coming up a half-length short in second last year after a strong closing finish.

The David O’Meara-trained 6-year-old gelded son of Whipper also owns a course and distance victory in the 2017 Balmoral Handicap and was a respectable sixth, beaten 2¾ lengths by Roaring Lion, in last fall’s Queen Elizabeth II Stakes (G1). Last out, in his lone 2019 race aside from the Dubai Turf, he was a troubled 13th behind Mustashry in the Lockinge Stakes (G1) at Newbury.

“He didn’t get any cover at Newbury and raced too keenly. He’s in good form and loves Ascot,” O’Meara said. “With the recent (wet) weather we have been getting, it’s all a positive for him, as well as the style of the way the Queen Anne is run. It will suit him. We are expecting him to run his race.

“Last year he ran very well,” he continued. “I think he’s every bit as good or better than (2018 winner) Accidental Agent. He then went on and ran a very good race to finish third in the Sussex Stakes (G1) at Goodwood and then beat Mustashry at York (in the Group 3 Strensall Stakes on Aug.25).

“There are some bits and pieces of form in there that suggest he could have won this last year.”

Nine of Thursday’s declared runners raced during the Dubai World Cup Carnival, including Dream Castle and Mythical Magic, who will represent Godolphin in the first race of the meeting, the £600,000 Queen Anne Stakes (G1) over 1600m on the straight course. Dream Castle swept all three course and 1800m distance preps for the Dubai Turf sponsored by DP World (G1)—the Singspiel (G3), Al Rashidiya (G2) and Jebel Hatta (G1)—before floundering in the big event, but appears primed for a top effort after finishing fifth last out (beaten 1¾ lengths) in France’s Prix d’Ispahan (G1).

Appleby-conditioned Mythical Magic, who was a stylish winner of the Feb. 21 Zabeel Mile (G2) and was second in D’bai’s Al Fahidi Fort (G2) a month prior, hopes to reverse form after a lacklustre 12th in the Lockinge.