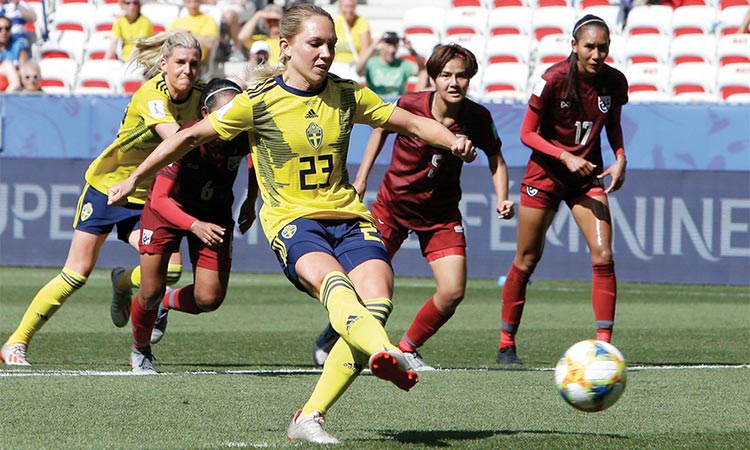 Sweden produced a breathtaking display of attacking football to thrash Thailand 5-1 in Nice on Sunday and book their place in the last 16 of the women’s World Cup.

Thailand, coming off a record 13-0 loss to defending champions US in their Group F opener, conceded twice in the opening 20 minutes as they struggled to win aerial battles against a much taller Swedish team. Centre back Linda Sembrant broke the deadlock for Sweden with a thumping header off an Elin Rubensson free kick, before midfielder Kosovare Asllani pounced on a rebound to double their lead.

Fridolina Rolfo hammered in a third from outside the box as Sweden finished with three goals in the first half of a World Cup match for the first time since a third-place playoff win over Germany in 1991. Forward Lina Hurtig and Rubensson scored in the second half to add gloss to the scoreline, while forward Kanjana Sung-ngoen pulled one back for Thailand in the closing stages.

It was a much improved display from Sweden, who peppered the Thailand goal with 34 attempts, after they laboured to a 2-0 victory over Chile in their opening match.

Elsewhere, Canada beat New Zealand 2-0 in a Group E game in Grenoble on Saturday to cement a place in the second round and leave the Kiwis on the brink of elimination.

Canada had beaten Cameroon 1-0 in their opening game while New Zealand had battled hard before losing to an injury-time Dutch goal.

On Saturday, Canada again dominated and bombarded the New Zealand goal with 22 total strikes, 11 of them on target. The Canadians took the lead after 48 minutes.

Nichelle Prince raced down the left wing, where the New Zealand defence had struggled even before right back CJ Bott went off injured in the 17th minute. Prince cut in along the goal line and then pulled a precise pass back to Jessie Fleming who side-footed the ball inside the far post.

Prince added a second after 78 minutes, poking home a rebound from close range after Christine Sinclair’s powerful downward header hit the inside of the post.

Despite the assist, it was another frustrating evening for 36-year-old Sinclair who is chasing retired American Abby Wambach’s record of 184 international goals.

Sinclair remained on 181 goals for Canada after nodding the ball against the bar in the first half, skying a shot from a precise low cross by the outstanding Janine Beckie early in the second and hitting the post before Prince’s goal.

Canada and the Netherlands meet in Reims on June 20 to decide who will top the group.

At the same time, New Zealand will play Cameroon in Montpellier. As things stand, a win could be enough to take either team through to the second round as one of the four best third-place teams, although that could change by kick off.

Meanwhile, Vivianne Miedema became her country’s all-time record goal-scorer with a brace as the Netherlands saw off a spirited Cameroon 3-1 in earlier match on Saturday.

Miedema’s goals came either side of a close-range Dominique Bloodworth strike for the European champions in Valenciennes, with Gabrielle Aboudi Onguene netting for Cameroon.

The Netherlands have won two out of two in Group E and their place in the knockout rounds is therefore secure before they take on Canada in Reims next week.

Miedema’s double means the 22-year-old forward already has 60 international goals, making her the all-time top scorer for the Netherlands women’s side.

Sarina Wiegman’s team were helped by a huge Dutch support which turned the Stade du Hainaut into a sea of orange, with around 15,000 fans expected in the northern French town which lies only a two-hour drive across Belgium from the southern Netherlands.

Those Dutch supporters saw their team take the lead in the 41st minute through a fine goal, with exciting winger Shanice van de Sanden playing a one-two with Jackie Groenen before crossing for Miedema to head home.

The lead lasted only two minutes, though, with Aboudi Onguene latching onto a long ball forward and rounding goalkeeper Sari van Veenendaal to score.

However, the Dutch restored their lead within three minutes of the second half starting, with the Indomitable Lionesses failing to deal with a well-worked free-kick and the ball falling for defender Bloodworth — who plays with Miedema at Arsenal — to convert.

Substitute Lineth Beerensteyn then played in Miedema to run through and blast in their third late on.

Canada can also clinch qualification for the last 16 with a win over New Zealand later in Grenoble.