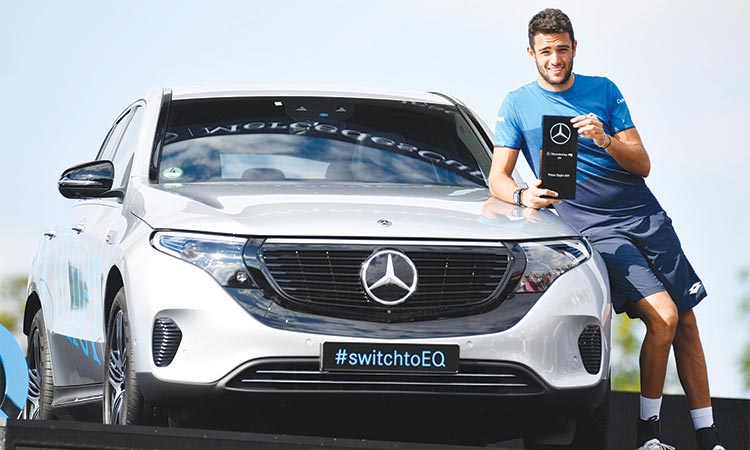 Italy’s Matteo Berrettini poses with his trophy along with the Mercedes-Benz that he won after defeating Canada’s Felix Auger-Aliassime in their final at the Stuttgart Open. Agence France-Presse

Roger Federer says staying wide awake will be the key to his grass court season with his focus on claiming a record tenth Halle title this week.

The 37-year-old Swiss was given the run around by Rafael Nadal last time out on the Roland Garros clay, but says he’ll be back in his element on his prefered lawns at the freshly renamed Noventi Open.

“It was good to reach the semi-final of a Grand Slam tournament again, and in my first appearance in Paris for four years,” said Federer, who last won the title in Paris in 2009.

“I feel fresh, rested and ready for the grass season now,” said Federer, who will target a ninth Wimbledon win in July.

“The surface suits me: I like the intuitive, aggressive game,” Federer told a press conference ahead of Halle.

“The matches on grass are often decided in a few rallies. You have to stay awake and concentrated.” Federer added: “Winning the tournament always has to be my goal in Halle.

“I love to play at this venue, so I am going into the tournament with a very good feeling,” said Federer, who first appeared in Halle in 2000 and has gone on to play the tournament 15 times.

“It would be just amazing to win for a 10th time,” said Federer, who was beaten by Croatia’s Borna Coric in the final last year.

Federer also revealed he would have a bird’s eye view of the action while resting up at his hotel, where his room overlooks Court 1.

“When friends come here they can’t believe you can watch tennis from the hotel. It is totally cool to watch your rivals and friends playing from your balcony.”

Federer gets his campaign under way against a tricky opponent in John Millman, who beat him at Flushing Meadows last season.

“John is always a tough opponent who doesn’t give anything away. He always gives 100 percent on court and it will be a real test, but that is perhaps exactly what I need.”

Meanwhile, Canadian rising star Felix Auger-Aliassime’s wait for a maiden ATP title was extended on Sunday as the teenager was beaten by Italian Matteo Berrettini in the Stuttgart final.

The victory in the grass-court Wimbledon warm-up was the 30th-ranked Berrettini’s third title, after triumphs on clay in Gstaad last year and Budapest in April.

Auger-Aliassime is one of a number of Canadian youngsters climbing through the tennis ranks, including Denis Shapovalov and Bianca Andreescu. He saw five set points come and go in the second-set tie-break, before the 23-year-old Berrettini — the first Italian grass-court finalist since Andreas Seppi at Eastbourne in 2011 -- took his third match point.

This was Riske’s second career WTA win after victory in 2014 at Tianjin and comes after she had lost her last three encounters with Bertens.

After a 6-0 hammering in the opening set Riske, ranked 61st in the world, showed form and character on the grass court as Wimbledon swings in to view.

This was also a tenth straight win on grass for Riske, who succeeds Serbia’s Aleksandra Krunic as champion.

In the men’s final Jordan Thompson of Australia is taking on France’s Adrian Mannarino.

All the while, France’s Adrian Mannarino ended his long wait for an ATP title by beating Jordan Thompson to win the grass-court event in ‘s-Hertogenbosch on Sunday.

World number 44 Mannarino’s best results have come on grass -- having twice reached the final in Antalya and made the second week of Wimbledon three times.

Australian Thompson, who reached the third round of a Grand Slam tournament for the first time in his career at the recent French Open, was playing in his maiden tour final.

Mannarino and Thompson had both won their semi-final matches earlier in the day after rain curtailed play on Saturday, beating Croatian second seed Borna Coric and Frenchman Richard Gasquet respectively.