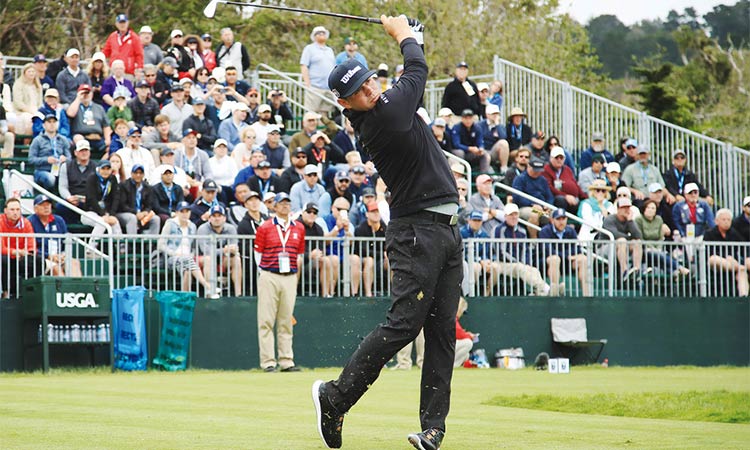 Gary Woodland plays a shot from the 17th tee during the second round of the US Open at Pebble Beach Golf Links on Friday. Reuters

Gary Woodland drained a 50-foot birdie put at his final hole on Friday to cap a six-under par 65 and take a two-stroke US Open lead over former champion Justin Rose at Pebble Beach.

Woodland’s tee shot at his final hole, the par-four ninth, nestled in a divot in the fairway, but he still managed to reach the green in two to close out his round in sensational style.

“That was just a bonus,” Woodland said. “Hit a beautiful drive. I was in the divot, a pretty deep divot. We were a little indecisive what we were going to do. We tried to take a little less club and hit it hard and play out to the safe to the right and was nice to knock it in.” Woodland was more pleased with a tough up and down for par at the eighth, where he sank a clutch 15-foot putt after chipping from the greenside rough.

“That was huge,” he said. “I played beautifully all day. I didn’t want to give a shot back.”

Woodland became just the third player to post a 65 in US Open play at Pebble Beach, a record set by Tiger Woods in 2000 and equalled by Rose on Thursday.

His 36-hole total of nine-under 133 is one shot better than Woods posted had in 2000, when he led by six on the way to a crushing 15-stroke triumph.

Woodland, a three-time winner on the PGA Tour who led last year’s PGA championship at the halfway stage on the way to his best major finish -- a tie for sixth -- has plenty of marquee names on his tail.

Rose, the 2013 US Open winner, fired a second-round 70 for 137. Former British Open winner Louis Oosthuizen of South Africa had seven birdies and six bogeys in a wild 70 for 136.

Four-time major winner Rory McIlroy and South African-born American Aaron Wise were a shot back on five-under 137, McIlroy with a 69 and Wise a 71.

Five players were tied at four-under, a group that included two-time defending US Open champion Brooks Koepka, who carded his second-straight 68. He was tied with Americans Chez Reavie, Chesson Hadley and Matt Kuchar and England’s Matt Wallace.

The US superstar stumbled to a bogey-bogey finish in a one-over par 72 that left him even four the tournament.

“Not a very good finish,” Woods said shortly, admitting he was “still a little hot” shortly after signing his scorecard.

Although birdies were still plentiful, Pebble Beach proved it could still bite.

McIlroy was flying at six-under for the tournament when he found himself unable to get up and down for par from a greenside bunker at 13. He then took a double-bogey seven at the par-five 14th.

McIlroy, coming off a seven-stroke romp at the Canadian Open, responded with back-to-back birdies.

“Those birdies on 15 and 16 felt huge to get me back in this tournament for the weekend,” he said.

“I need to keep it going. Fairways, greens: It sounds boring and cliched but that’s what you need to do round here. The course is only going to get tougher.”

Rose considered himself in the “perfect spot” at seven-under, even if it wasn’t the top of the leaderboard.

“At this point there’s not a lot to worry about,” said Rose, adding that he was doing what it takes to win a US Open.

“My short game has been really, really strong this week. I’ve made a lot of putts inside 10 feet. I’ve managed my game really well.

“I’ve always given myself an opportunity to salvage something out of every hole I’ve played. And I haven’t compounded any mistakes so far.”

Koepka, trying to become just the second golfer to win three straight US Open titles, said much the same. He teed off on 10 and was even through nine holes with one birdie and one bogey. He put together back-to-back birdies at six and seven to inch up the leaderboard.

“I know you just need to be hanging around on the weekend,” he said.