No need for England to panic over injuries, says Morgan - GulfToday

No need for England to panic over injuries, says Morgan 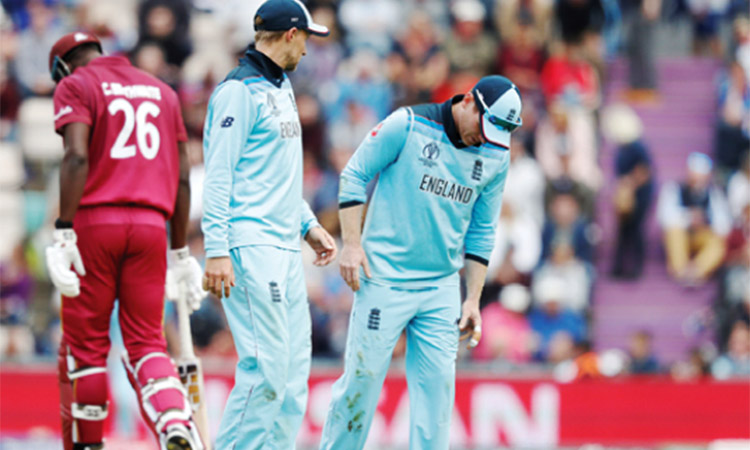 England’s captain Eoin Morgan (right) is assisted by team-mate Joe Root as he walks off the field with an injury during their World Cup match against the West Indies in Southampton on Friday. Agence France-Presse

Eoin Morgan said there was no reason for England to panic despite injuries that forced him and Jason Roy off the field during the World Cup match against the West Indies on Friday.

Morgan was forced to stand up in his post-match press conference because of a back spasm after his side beat West Indies by eight wickets in Southampton to record their third win in four matches.

Earlier, both he and Roy had to leave the pitch during the West Indies innings after suffering injuries.

Morgan suffered a back spasm and Roy had tightness in his left hamstring. Neither batted in England’s reply.

“I think when any two players go down it is a little bit of a worry,” said Morgan. “I don’t think — we are not at panic stations or anything yet.

“We will just see how we get on in the next 48 hours and go from there.”

Morgan said he was forced to stand because he was in pain.

“We think it is another back spasm.  “It normally takes a few days to settle down. It’s unclear. We’ll know more in the next 24 hours, see how I pull up tomorrow.”

Morgan was also unclear on the extent of the injury to Roy, who scored 153 in England’s win against Bangladesh last week. “I don’t know how he will pull up tomorrow,” he said.

“He had a tight hamstring so he will go for a scan tomorrow and probably it will take 48 hours before we have the results and stuff.”

The skipper said it was too soon to say whether he would be fit to face Afghanistan in England’s next match at Old Trafford on Tuesday.

“I don’t know. Like everybody, we will have to see how it pulls up, particularly probably with myself and Jason, maybe a couple of the bowlers, and do a risk assessment and see how risky it is going into that game, bearing in mind we have two games in quite a short space,” he said.

He said he was “exceptionally pleased” with how century-maker Joe Root filled in for Roy at the top of the order and hailed his pace attack, who dismissed the West Indies for just 212.

“Strength in depth is something that we have worked on in order to plan for situations like this,” he said.