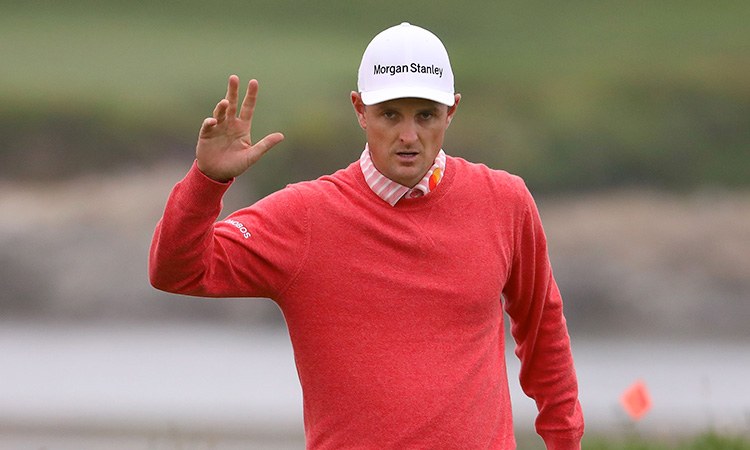 Justin Rose hits a tee shot on the 18th hole during the first round of the US Open Championship in Pebble Beach on Thursday. Associated Press

Justin Rose roared home with three straight birdies to match Tiger Woods’ record for the lowest US Open round ever shot at Pebble Beach, a six-under par 65 that gave him a one-shot lead after the first round on Thursday.

England’s Rose, who won the 2013 US Open at Merion, vaulted over a quartet of players sharing second on five-under-par 66 as Pebble Beach showed a welcoming face in cool, overcast conditions with little wind.

Americans Rickie Fowler and Xander Schauffele and South Africans Louis Oosthuizen and Aaron Wise were in the clubhouse on 66 when Rose stormed home.

He took sole possession of the lead at the last, blasting out of a greenside bunker and draining an 11-foot birdie putt.

Knowing he had equalled the 65 shot by Woods in the first round on the way to his crushing 15-shot US Open triumph at Pebble Beach in 2000, Rose gave a restrained fist pump.

“I was thinking, ‘This would be kind of cool doing it front of the great man himself,’” said Rose, who played alongside Woods and Jordan Spieth.

Woods produced an outstanding performance on the greens as he scrambled to a one-under par 70.

Scott Piercy teed off before 7am and quickly showed that Pebble Beach was there for the taking, moving as low as five-under before finishing on four-under 67. He was joined there in a tie for sixth by fellow American Nate Lashley.

After the US golf Association was stung by criticism over course conditions at last year’s US Open at wind-dried Shinnecock Hills, Pebble Beach’s small, slanting greens were moist and receptive.

“The putting surfaces are as good as I’ve seen them,” said Koepka, although he and the rest of the field fully expect them to firm up as the week goes on as the USGA gets stingier with the water.

On Thursday, however, 39 players were under par, and 17 eagles were the most in a US Open in 50 years.

Along with Rose, currently ranked fourth in the world, four other major-winners featured in the top 15: Oosthuizen, Stenson, McIlroy and Molinari.

Koepka -- who has won four majors in less than two years and can become just the second player to win three straight US Opens and the first in more than a century -- was among a dozen players on 69.

He applied pressure on the leaders as he raced to four-under through six holes.

He followed a bogey at eight with a birdie at 12, but was three-under after a bogey at 13 and dropped a shot from a greenside bunker at the par-three 17th.

His tee shot at 18 found an asphalt cart path, but he hit his second shot off the deck on the way to a par, missing a four-foot birdie putt.