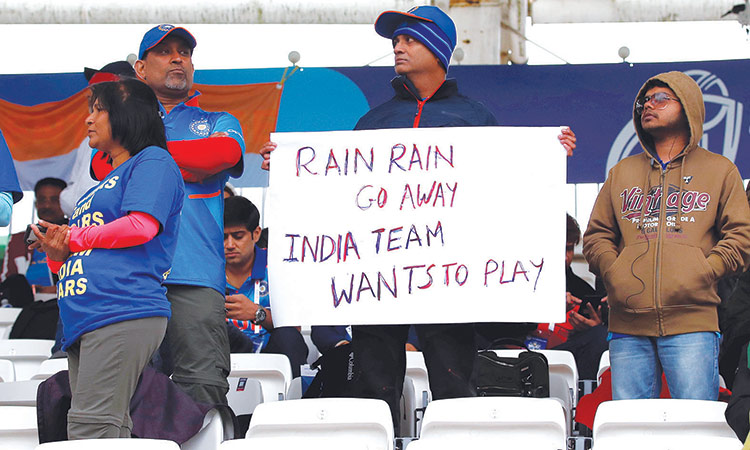 A fan holds a placard before the India-New Zealand match was abandoned. Reuters

Sharjah: Rain, rain go away little Johnny wants to play – one of the most popular rhymes that all of us have read and every kindergarten student knows by heart.

The rain has always been notorious for playing spoilsport, marching relentlessly over the ambition of the desperate children, who want to make hay while the sun shines during their holidays.

A downpour can not only ruin the children’s party but also seal the fate of professional teams and it was evident at many instances in cricket matches.

There can be nothing more disappointing for fans and players than an abandoned game that too at a showpiece event. The way matches are being rained off at the World Cup, it looks a downpour will seal the fate of the four semi-finalists or at least have a role in deciding the last four line-up. Four matches have already been sacrificed at the altar of the weather.

According to the UK meteorological department, it rains 156.2 days per year on an average in England with Oct-Jan being the wettest and March-April the driest months.

So why the World Cup was not scheduled during the driest months remains the third biggest mystery with Duckworth and Lewis in second and wife’s mood still occupying the top spot.

The growing clamour for a reserve day for every match is logistically unfeasible and practically improbable. ICC has already issued a detailed statement over the matter. Sometimes rain plays havoc, other times a saviour. And one team in particular that have always been on the receiving end of the torrential showers are South Africa.

Who can forget the infamous semi-final of the 1992 World Cup when Proteas were asked to score 22 runs off one ball after the rain halted the match briefly?

But at the 2019 World Cup, the same downpour brought a respite to the under-fire South African camp – after they suffered three successive defeats in as many games – and handed them their first and the only point in the tournament after four games.

South African captain Faf du Plessis himself admitted that he feared losing the match against the West Indies if the game had to be played under the Duckworth and Lewis system with reduced overs after the rain had marred the clash.

A stuttering South Africa had already lost two wickets and were reeling before the drizzling culminated in a shower-cum-heavy downpour to force another washout.

In Sri Lanka’s two matches rain played spoilsport and the Lions had to settle with one point each time, which took their tally to four from as many games after one win and defeat each. Whether they were lucky to be satisfied with one point or unlucky to have squandered a chance to sprint away with two points on each occasion remains to be seen.

On the other hand the West Indies, who are favourites alongside India, England and Australia for a semi-final spot, must be rueing as they had an upper hand in both their washout games. One thing is for sure, rain is going to play a decisive role in deciding the semi-finalists in this format of the tournament.

In case of a tie-break many factors will come into effect such as run rate, head to head record and seeding. When every run scored and every wicket fallen will play a vital role in deciding the last four, then the teams who fail to make the cut will surely blame one of their abandoned games. Seeing the weather condition, meteorological predictions and the manner in which matches are being rained off, I fear a repeat of the 2002 Champions Trophy final.

The final  played between India and Sri Lanka was washed out for two consecutive days on Sept.29 and 30 in 2002 as there was a heavy downpour on the reserve day as well which forced the organisers to declare both the teams as joint winners. The prospect of having joint winners at the World Cup will leave many fans across the globe quietly grinning with delight as it is always better to share a windfall than to lose it all.