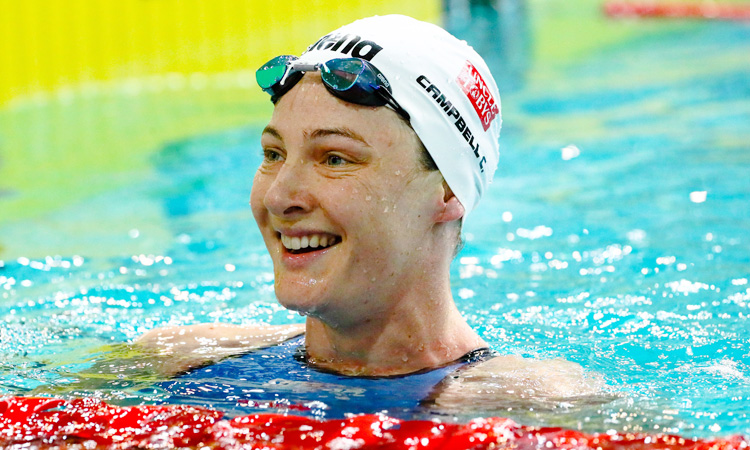 Cate Campbell shored her up standing as a gold medal favourite at the world championships next month with a sub-53 second swim in the 100m freestyle at the Australian trials on Thursday.

The former world record holder, who owns the fastest time this year, hit the wall in 52.12 to throw down the gauntlet to Sweden’s Sarah Sjostrom, who holds the current world mark of 51.71.

Campbell’s time in Brisbane was faster than the 52.27 swum by American Simone Manuel to win the world title in 2017.

“I’m really pleased with the race I put together tonight,” said the 27-year-old, who famously flopped in the 2016 Olympic final as the red-hot favourite.

She had already won the 100m butterfly to book her place in South Korea then upstaged Australian swimming’s new golden girl — Commonwealth record holder Ariarne Titmus — in the 200m freestyle.

Australia’s depth in the 100m was again on show, with four swimmers inside the qualifying time but only two able to claim individual spots.

Campbell’s sister Bronte, the 2015 world champion, came third as she returns from shoulder surgery, with young gun Shayna Jack fourth. They will make up the 4x100m relay team, who will be heavily favoured to win gold.

In the men’s 200m breaststroke, Matt Wilson was under world record pace for the first 150m before fading in the last 50.

But Wilson, who set a new Commonwealth record this year, again proved he will be a big threat next month after touching in 2:07.79. Zac Stubblety-Cook also qualified.

“I have to admit I was hurting in that last 25. I’m just happy to get on the team,” he said on the penultimate day of the six-day trials.

Former dual world champion Mitch Larkin continued his stellar form, following up his new Commonwealth record in the 200m individual medley with victory in his pet event, the 200m backstroke, touching in 1:55.03.

Larkin will also swim the 100m backstroke in Korea after clocking the second best time in the world this year on Monday.