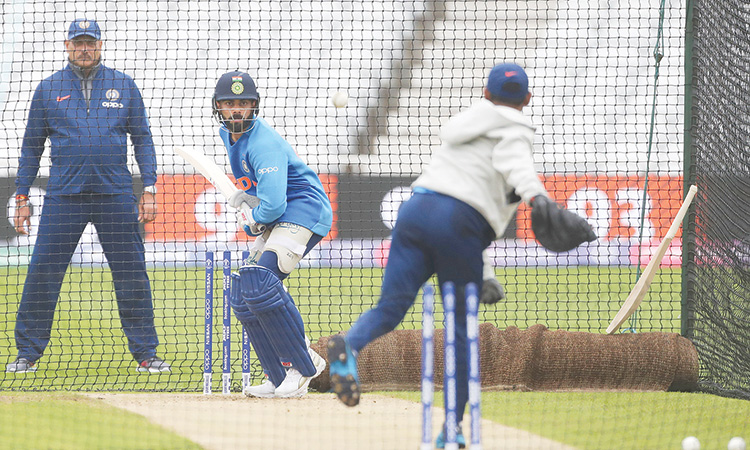 India and New Zealand, the only two unbeaten sides in the ongoing World Cup so far, will look to dominate each other and prove a point when they meet on Thursday at Trent Bridge in Nottingham.

The Black Caps have been absolutely ruthless in the three games they have played so far in the tournament.

After defeating Sri Lanka by 10 wickets in their tournament opener, the Kiwis didn’t put their foot off the peddle and registered comprehensive victories against Bangladesh and Afghanistan in their next fixture.

On the other hand, India have also played like tournament favourites and have registered reaffirming wins over South Africa and Australia. However, they would be wary off the fact that they had to be at their absolute best against Kane Williamson’s side which defeated them quite convincingly in the warm-up fixture.

In that warm-up game, the Indian batsmen seemed to have no clue against the pace and swing from Trent Boult and other Kiwi pacers and were bundled out for mere 179 which the Black Caps chased down with ease at the Kennington Oval in London.

As Shikhar Dhawan is out for the game, the Men in Blue will hope that KL Rahul — who in all likelihood, will open the innings alongside Rohit Sharma — gives them a solid start and lay the foundation for the upcoming batsmen to score big and go full throttle against the New Zealand bowlers.

Rishabh Pant has been called up as cover for Dhawan in squad, team chiefs confirmed on Wednesday.

The left-handed opener has been put under medical observation and Pant will join the team in England and Wales and stay on as standby.

“We will be observing Dhawan and around the 10th or 12th day we will know where he stands,” India’s assistant coach Sanjay Bangar told reporters ahead of Thursday’s match against New Zealand at Trent Bridge.

“We do not want to rule out a precious player like Shikhar.” Bangar added: “If and when a replacement is required, it’s always good to have a replacement coming in and practising with the team as a standby”.

He remain optimistic, however, of welcoming the southpaw back before the June 30 clash against hosts and tournament favourites England.

The team’s media manager said Pant, whose omission from the 15-man World Cup squad was a topic of debate, would join the side in Manchester ahead of the match against arch-rivals Pakistan, which takes place on Sunday.

Also, it will be interesting to see whom they include in place of Dhawan. Either they can include Dinesh Karthik to strengthen their batting or they can go with either Ravindra Jadeja or Vijay Shanker who give them a bowling option too.

The pitch at Trent Bridge is easily one of the best batting wickets in the country but the overcast conditions would definitely assist the fast bowlers.

So, far the two teams have met seven times in all World Cup editions and New Zealand hold an edge of 4-3 against India. Thus, Virat Kohli would be looking to better that record.

Meanwhile, New Zealand batsman Ross Taylor says it is too early to pick favourites for the World Cup, with most of the 10 teams firmly in the race to reach the semi-finals.

Williamson’s side have won all three of their matches to top the table ahead of their match against India in Nottingham on Thursday.

But Taylor said the round-robin format gives enough time for sides to get into their rhythm towards the business end of the tournament.

“I think it’s still early on. The majority, all nine (other) teams are still, or maybe realistically seven teams still in the hunt,” Taylor said.

“I think it’s not only the way the draw works out, you know, if you can get into a bit of a roll towards the end -- first and foremost, you’ve got to get into the semi-final.”

Taylor said that his team’s recent success against the Kohli-led side, including their ability to deal with Indian spinners in Kuldeep Yadav and Yuzvendra Chahal, would give them confidence.

“We’ve faced India a lot in recent times and had some success against them,” said Taylor, who hit a match-winning 82 against Bangladesh.

“Obviously, two world-class spinners on their day. I think we’ve had success at different stages. We’ll have to wait and see what the wicket produces tomorrow,” he added.

Taylor said India would miss the injured Dhawan and the chance to open with a left-right batting combination, with Rohit Sharma.

The Kiwis on the other hand have a right-left pair of Martin Guptill and Colin Munro, which Taylor said was useful on English grounds with shorter boundaries on one side of the wicket.

“I haven’t been in the bowling meetings, but obviously Shikhar is a big loss to India. The presence, he plays very well at ICC (International Cricket Council) tournaments and has a very good record over here,” said Taylor.