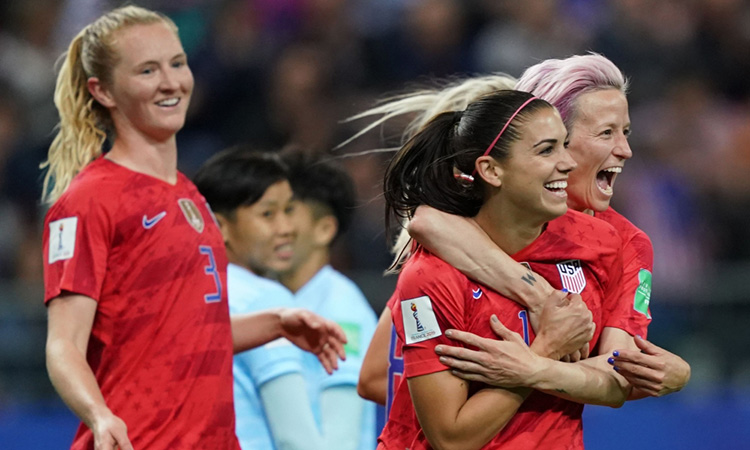 Holders US began their trophy defence by recording the biggest win in Women’s World Cup history as Alex Morgan scored five goals in a 13-0 demolition of hapless Thailand on Tuesday.

In a late Wednesday match, Germany brushed off the absence of injured star player Dzsenifer Marozsan to beat Spain 1-0 and take control of Group B in the Women’s World Cup, virtually assuring themselves of missing the rampant US in the last 16.

Paris Saint-Germain midfielder Sara Daebritz earned the Germans a hard-fought three points by pouncing three minutes before the break ahead of dithering Spain defender Marta Torrejon, who only had to clear the ball after her goalkeeper Sandra Panos did well to save Alexandra Popp’s header.

The win puts Martina Voss-Tecklenburg’s side three points clear of Spain and one better on goal difference after narrow victories in both their group matches and means they need a point against South Africa -- who play China in Paris on Thursday -- on Saturday to be completely sure of topping the group.

Also, earlier on Wednesday, Nigeria inched towards qualifying for the knockout stages of the Women’s World Cup for the first time in 20 years after beating South Korea 2-0.

The USA, who won the World Cup for a third time in Canada four years ago, scored 10 in the second half in Reims as they bettered Germany’s 11-0 win over Argentina in 2007 and shattered their own previous tournament best of 7-0.

Rose Lavelle and Samantha Mewis netted twice each while Lindsey Horan, skipper Megan Rapinoe and substitutes Mallory Pugh and Carli Lloyd also got on the scoresheet in an embarrassingly one-sided Group F encounter watched by more than 18,000 at the Stade Auguste-Delaune.

But the Americans’ wild goal celebrations in such a one-sided game were not to everyone’s taste.

Former Canadian international player Kaylyn Kyle, working as an analyst for Canada’s TSN at the tournament, said on air: “As a Canadian we would just never ever think of doing something like that ... For me it’s disrespectful, it’s disgraceful.”

The Americans were relentless against opponents ranked 34th in the world and hit back at suggestions they could have taken their foot off the pedal and saved Thailand from complete humiliation, rather than scoring six times in the last 16 minutes.

“This is a world championship so every team that is here has been fantastic to get to this point. To be respectful to opponents is to play hard against opponents,” said USA coach Jill Ellis.

Morgan, who now has 106 goals for her country, matched a record set by her compatriot Michelle Akers by scoring five times in a World Cup game.

“With the scoreline tonight, we have to look at the group stage as every goal counts and it was important for us to continue to go,” insisted the striker.

The reigning champions -- with four survivors in their line-up from the team that started the final against Japan four years ago -- scored as many goals as there had been in the previous seven matches at the tournament.

Group rivals Sweden, who ousted the USA in the quarter-finals of the Rio Olympics three years ago, started their campaign with a 2-0 win over Chile in Rennes earlier in the day, but only after a hold-up because of torrential rain. Sweden face Thailand next.

Elsewhere, Germany coach Martina Voss-Tecklenburg revealed that star player Dzsenifer Marozsan may miss the rest of the tournament after being ruled out of Wednesday’s Group B clash with Spain because of a broken toe.

Nigeria inched towards qualifying for the knockout stages of the Women’s World Cup for the first time in 20 years after beating South Korea 2-0 on Wednesday.

In the South Korea, Nigeria tie, a comical 29th-minute own goal from Kim Do-yeon, who somehow hooked a long ball back past onrushing goalkeeper Kim Min-jung, and Asisat Oshoala’s neat finish 15 minutes from the end, left the South Koreans pointless after their first two games in Group A.

Thomas Dennerby’s Nigeria can now legitimately hope for a place in the last 16 regardless of what happens in their last group match against the tournament-hosting French.

South Korea meanwhile face an uphill task to go through now as they face a strong Norway side in their final match.