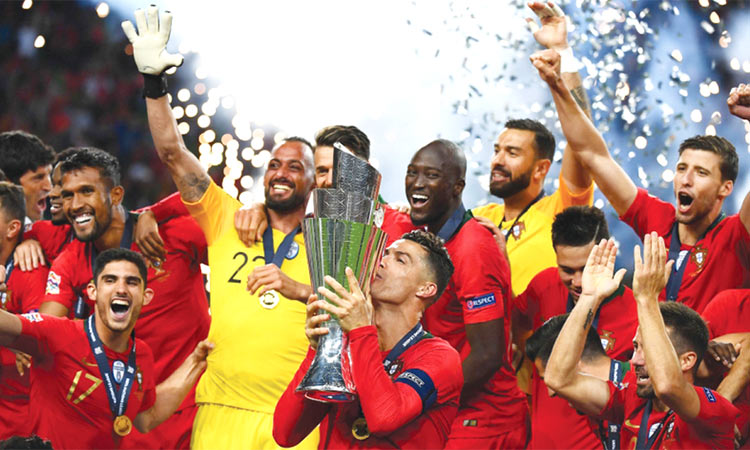 Portugal’s Cristiano Ronaldo kisses the trophy as he celebrates with team-mates after the Nations League final against The Netherlands on Sunday. Agence France-Presse

The Dutch defensive pairing of Virgil van Dijk and Matthijs de Ligt largely kept Cristiano Ronaldo quiet, but Valencia winger Guedes proved the match winner as his shot had too much power for Jasper Cillessen in the Netherlands goal.

“Thank god things have gone well for the national team in recent years. Portugal has won important things like Euro 2016 and now the League of Nations,” said Ronaldo.

“It may seem like an easy job but it’s hard, it takes a lot of dedication and willingness. I think the players deserve to be congratulated.”

Portugal had the advantage of an extra day’s rest and not being forced to extra time against Switzerland in their semi-final as the Dutch were in seeing off England on Thursday.

And the hosts looked the fresher throughout with Ronald Koeman’s men jaded at the end of a long season.

“If we were tired I don’t know, but we were not good enough,” admitted Koeman.

“They defended well and the were very compact in their game, but you have to be better with the ball and we were not.”

The match had been billed as a showdown between Ronaldo and Van Dijk but with the Dutch captain again rock solid at the back, Portugal’s main threat came from midfield with Bernardo Silva rightfully winning player of the tournament.

Silva provided the one true moment of quality to decide the game.

He broke through the Dutch defence and then picked out Guedes, who bravely ignored playing in Ronaldo to drill a low shot past Cillessen himself.

The Netherlands have made huge strides in just over a year since Koeman took charge after missing out on even qualifying for the last two tournaments.

After overcoming world champions France and Germany in the group stages, Koeman’s men also outclassed England in the semi-finals.

However, unlike in midweek when Frenkie de Jong dominated the midfield against the English, Holland’s latest Barcelona-bound star was unable to seize control of the game and their lack of a top-class striker left the Dutch toothless up front.

Ronaldo meanwhile insisted he has no immediate plans to retire from international football after helping Portugal lift the inaugural Nations League.

Ronaldo, 34, was a peripheral figure as Guedes’s goal won an underwhelming final against the Netherlands 1-0 in Porto.

But after sitting out the group stage of the Nations League on a hiatus from international football, Ronaldo played a huge part in getting his country to the final by scoring a hat-trick in Wednesday’s semi-final against Switzerland.

And with a host of exciting young talent, led by Manchester City’s Bernardo Silva, who picked up player of the tournament, Ronaldo is keen to hang around for the chance at more international glory as Portugal look to defend their European Championship title next year.

“Portugal has won important things like Euro 2016 and now the Nations League. It may seem like an easy job but it’s hard, it takes a lot of dedication and willingness,” Ronaldo told Portuguese TV station RTP.

“As long as I have the strength and motivation, I will continue to represent the colours of Portugal.

“When I am with the national team I feel like at home.”

Victory was especially sweet for Ronaldo as the only surviving member of the Portuguese side beaten on home soil by Greece in the final of Euro 2004.

“I have been with the national team for 16 years and I still feel the same enthusiasm as when I was 18 years old,” he added.

“I will always give my best and the Portuguese are always on my side so I thank them for their enthusiasm for me.

“I try to match that with good performances, goals, and help Portugal win trophies.”