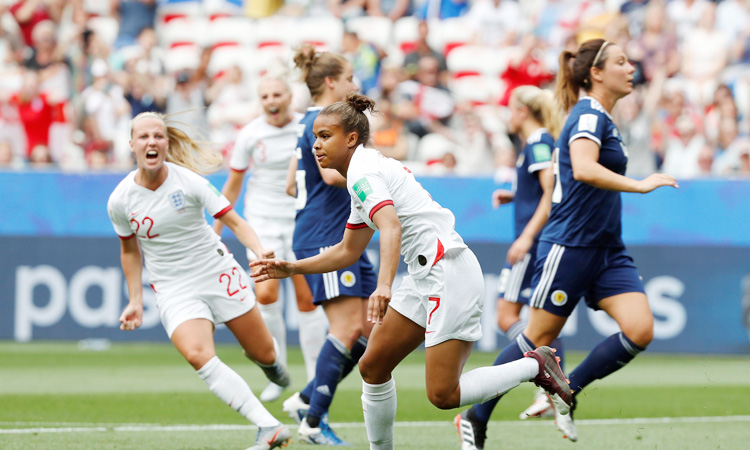 England coach Phil Neville did not hold back in his praise for Nikita Parris after the forward was named player of the match in her side’s 2-1 win over Scotland at the Women’s World Cup on Sunday.

The 25-year-old scored England’s opening goal from the penalty spot and tormented the Scottish defence from the right flank as the Lionesses got their campaign off to an ideal start in Nice.

“Nikita is the example of the work that England have done, that Manchester City have done, and what Nikita herself has applied over the last 16 months,” said Neville, who became coach in early 2018.

Parris looks ready to make a big impact at the competition after her prolific form in the Women’s Super League (WSL) for City secured a move to Champions League winners Lyon.

“We have seen a player develop from being a really, really good WSL player, to signing for the best team in the world in Lyon, scoring goals in the WSL, making an impact in the big games on the big occasions,” said Neville.

“She is someone that has still got another five or 10 percent left in her,” he added as he called the forward from Liverpool “a special player.”

One highlight of Parris’s display came when she nutmegged Scotland defender Nicola Docherty in her own half.

It was a difficult day for Docherty, whose handball gave Parris the chance to open the scoring before Ellen White made it 2-0. Claire Emslie got a goal back, but England held on despite the rocky finish.

“To finish the last 20 minutes like we did, I think it was actually the best thing for us, to keep us on our toes. It means that we have still got lots to do,” insisted Neville, whose team play Argentina next in Le Havre.

The former Manchester United and Everton player is hoping there will be a bigger England support there after a rather underwhelming turnout on Sunday, with little over 13,000 fans in a stadium which holds more than twice that.

Nevertheless, he called his first World Cup match in charge “an unbelievable occasion.”

“I think everybody concerned, Scotland and England, has got to be really proud that we are taking part in something really special.”

Neville’s major concern now is getting Millie Bright fit to face Argentina on Friday after the defender came off with a shoulder injury. He hopes to have Demi Stokes and Barcelona forward Toni Duggan back too.

Meanwhile, Scotland coach Shelley Kerr took comfort from the way her team fought back in the second half in their first ever World Cup finals game.

She will now hope to take something from their next match against Japan in Rennes. Another defeat there will make qualifying for the last 16 an uphill struggle.

“I think the big thing for us now is that we need to recover because that was a tough, tough game, and we are going to face a tough Japanese team as well,” she said.

“It is going to be a different type of game against Japan, but I was really pleased with our second-half performance. There were lots of positives.”