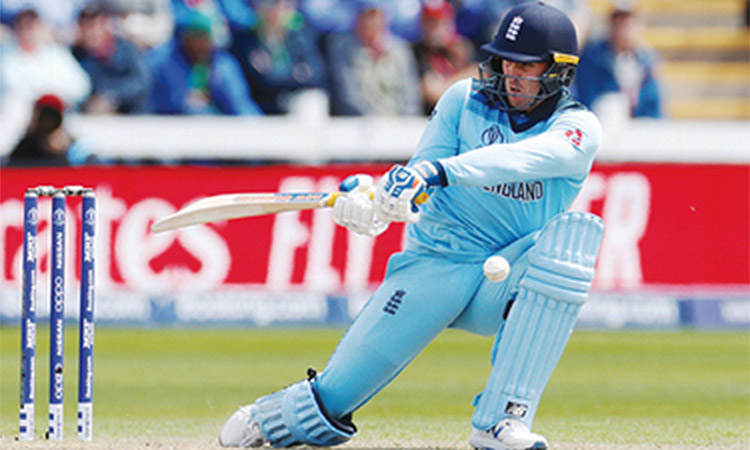 England’s Jason Roy (right) plays a shot against Bangladesh during their World Cup match in Wales on Saturday. Associated Press

CARDIFF: England captain Eoin Morgan hailed an “intimidating” Jason Roy after the opening batsman’s 153 fired England to victory over Bangladesh in their third World Cup match in Cardiff on Saturday.

Roy failed to reach double figures as World Cup favourites England suffered a surprise defeat to Pakistan last time out, but the 28-year-old was in imperious form to put England on course for their highest ever World Cup batting total and a 106-run victory over Bangladesh. His 150 was brought up with three successive sixes as Roy upped the ante, and captain Morgan highlighted just how important Roy is in the England set-up.

“The boys at the top of the order set a really solid platform,” Morgan said. “Jason managed to go on and get quite a significant score at a good clip again, which is great to see.

“He’s very intimidating to play against when he does score runs so the impact that has on their team is quite significant.”

Roy feels his partnership with fellow opener Jonny Bairstow, who alongside Roy put on the second century opening partnership of the World Cup, has been strong long before the World Cup began.

“Jonny and I have been doing pretty well together over the last few years so we’ve got not too much to worry about,” Roy said. “We’ll go out there and get the job done. “The captain is obviously going to be very happy. We’ve put in a very well-rounded performance. I’m extremely happy with the boys and I’m sure that he is too.”

Morgan was also full of praise for his side’s bowling attack, with the hostile Jofra Archer, who took 3-30, in particular attracting attention once more.

“All of our bowling is (a dream to captain),” Morgan added. “He (Archer), (Chris) Woakes, (Mark) Wood, (Liam) Plunkett, (Adil) Rashid and Ben Stokes at the end are wonderful to captain.

“All of the guys want to bowl at the crucial periods and today was no different. “The fielding is always an area where we are trying to put in a perfect performance so it’s always going to be tough trying to move onto the next game but today was a significant improvement.”