Great to start with three wins in a row, says skipper Williamson - GulfToday

Great to start with three wins in a row, says skipper Williamson 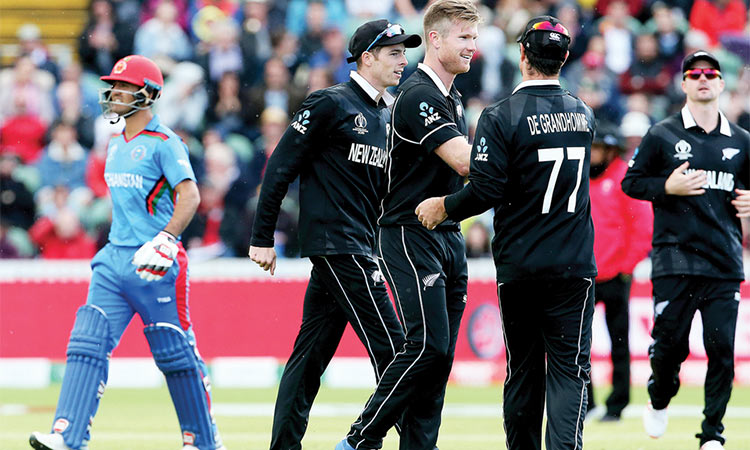 New Zealand’s James Neesham celebrates with his team-mates after taking the wicket of Afghanistan’s Najibullah Zadran during their match in Taunton on Saturday. Associated Press

New Zealand captain Kane Williamson said that the Kiwis have got an ideal start to the tournament. Their victory against Afghanistan was their third consecutive win of the tournament and they are one of the three teams to have remained unbeaten thus far.

“Every game you play, you set out to win it, and it’s great to have three wins in a row to start with,” said Williamson.

New Zealand bowled out Afghanistan for 172 on Saturday largely thanks to Jimmy Neesham and Lockie Ferguson picking four and five wickets respectively. They eventually won the match by seven wickets. Williamson was New Zealand’s top scorer with a 99-ball innings containing nine fours

“It was an outstanding effort. There are some world-class players in the Afghan side. I have played with a number of them for a few years. They got off to a good start and it was important to build some pressure in the middle-overs, and the way the seamers came back in the middle-overs was fantastic — pace, bounce and a bit of movement did it for them,” Williamson said in the post-match presentation ceremony.

“Lockie doesn’t need a lot of encouragement to turn up the speed. He has been fantastic in the three games so far. The left and right-arm combination helps up top and Neesham hitting the wicket hard with the bounce, pace and the movement -- the same with their opening bowlers. The fielding, I think, was great from us,” he said.

Williamson’s side have been unchanged in their three matches but former coach Mike Hesson, who guided the side to their only World Cup final in Australia in 2015, said they should consider bringing back Nicholls and opening bowler Tim Southee and introducing Ish Sodhi.

“I don’t subscribe to the theory of never changing a winning team, particularly when Nicholls and Southee were the incumbents before they got injured,” Hesson wrote in a column on Stuff Media on Sunday.

“It might mean Colin de Grandhomme and Matt Henry sit this one out. Again, horses for courses.”

While New Zealand’s bowlers have set the platform for their three victories by restricting Sri Lanka, Bangladesh and Afghanistan to below-par scores, Hesson said India would put pressure on the batters in Nottingham on Thursday.

“Conditions will be so different, and India’s two-pronged wrist spin attack of Yuzvendra Chahal and Kuldeep Yadav will challenge our middle order,” Hesson added.

“That’s where Nicholls is a serious option at six. Jimmy Neesham and de Grandhomme are both good ball strikers but not our best players of wrist spin. “If you have Nicholls and Tom Latham in the middle order they can hopefully score freely off these spinners as they can sweep and reverse sweep.

“You need to be able to have batsmen through the middle who have enough high percentage scoring opportunities.”

Rashid was unable to bowl for Afghanistan during their seven-wicket defeat against New Zealand at Taunton on Saturday after being hit on the head by a Lockie Ferguson bouncer in the first innings.

The ball bounced off Rashid’s helmet and hit the stumps, but when he left the pitch after being dismissed he looked clearly groggy.

After a first concussion test, it was decided Afghanistan’s star bowler wouldn’t be able to play on.

But Naib said he already felt better after the match, giving him a chance of recovering to play against South Africa on June 15.

“He’s feeling now better. The doctor said don’t go to the field but now he’s feeling well. So he needed rest. So obviously we have a couple of days. He’s fine now,” Naib told reporters.

“I asked the physio if he needed rest, some headache. We have a rest of one week for the other game. So now he’s feeling well. So he should go to hospital and check for some tests.