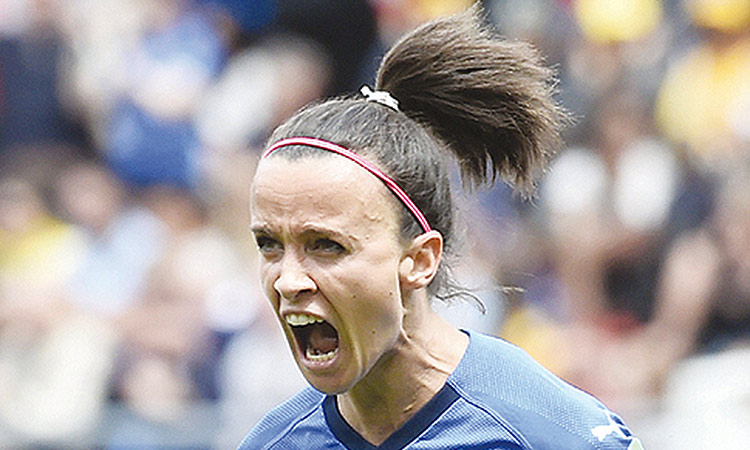 Italy’s midfielder Barbara Bonansea celebrates after scoring a goal against Australia during their Women’s World Cup match on Sunday. Reuters

Juventus’ Bonansea popped up at the back post to head home the winner having already levelled for the dogged Italians.

The Australians, tipped by many to have a big impact in France, had taken a first half lead through hotshot Sam Kerr.

The win puts Italy in a great position to qualify from Group C ahead of their next match with unfancied Jamaica on Sunday.

“What can I say, it’s incredible, and scoring with my head as well, which never happens with me,” said Bonansea, who had scored Italy’s first two World Cup goals in two decades.

“It’s so wonderful. I hope we can qualify for the knockout stage because these two goals are meant to help us do just that.” Bonansea was close to a hat-trick. Her eighth-minute strike was ruled out for the tightest of offsides following a long check via the video assistant referee (VAR) system, the first of two Italy goals scrubbed off for offside.

The Aussies quickly picked up the pace and were soon in front through their star Kerr, who was clumsily brought down by the otherwise excellent Sara Gama in the 21st minute.

The 25-year-old Kerr’s spot-kick was brilliantly saved by Laura Giuliani but the goalkeeper could only push the ball back out to Kerr, who slammed home the rebound.

Chloe Largazo then wasted two good headed chances to double Australia’s lead before half-time, and those missed chances -- among others -- allowed Bonansea to drag Italy back.

The 27-year-old pounced on a dreadful first touch from Clare Polkinghorne to race through and level with a smart finish past Aussie stopper Lydia Williams. After that the well-organised Italians slowly squeezed the life out of their opponents.

Italy thought their chance to snatch the points had gone when Daniela Sabatino’s slotted finish was ruled out for offside with nine minutes remaining, but Bonansea stepped up to make their return to the World Cup an ecstatic one.

England open their World Cup campaign with a Group D derby against Scotland in the day’s late game.

Cristiane started in place of Marta, who has not recovered from a thigh injury.

The 34-year-old, collecting her 139th cap, headed in the opener after 15 minutes, scooped a rebound over the line after 54 minutes and curled a free-kick in off the underside of the bar after 64 minutes.

While Jamaica’s pace sometimes troubled the Brazilian defence, Brazil could have won by more.

Reggae Girlz goalkeeper Sydney Schneider made a string of good saves including a dive to gather Andressa’s weak 38th-minute penalty.

Formiga, appearing in a record seventh World Cup and, at 41 years and 98 days the oldest woman to play in the competition, controlled midfield.

Paris Saint-Germain defender Daiane, who had flown in from Brazil on Friday to replace injured Erika, came on in the 76th minute.

All the while, Japan and Canada both begin their campaigns with hopes of taking home the trophy, while Cameroon and Argentina – the latter back after 12 years and still searching for their first point at this tournament – must upset heavy odds to make a winning start.

Carlos Borrello and his players know they will need to play a perfect match to compete against such a formidable team. The coach feels that Argentina can do this by focusing on ball possession, trying to avoid their opponents’ high press and profiting from aerial attacks. Another key factor: they can’t lose concentration for a second.