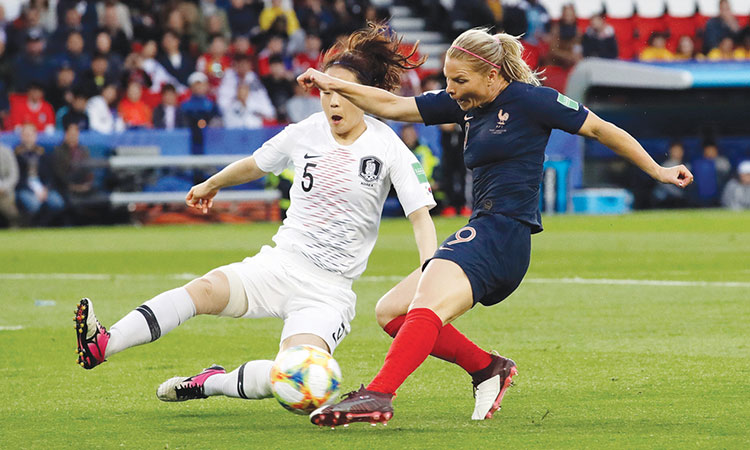 Host nation France crushed South Korea 4-0 in the opening game of the women’s World Cup on Friday, leaving former winners Germany with plenty to live up to as they prepare to launch their campaign.

It was a fine start to a tournament that has been billed as the biggest yet for the women’s game, with a sell-out crowd of more than 45,000 filling the Parc des Princes in Paris and celebrating a rampant French victory.

Les Bleues are among the favourites to win the trophy on home soil and they showed no mercy to the Koreans, with the prolific Eugenie Le Sommer giving them an early lead and defender Wendie Renard -- the tournament’s tallest player -- twice heading home before the interval.

Captain Amandine Henry, impressive throughout, wrapped up the win late on in the Group A encounter, watched by French President Emmanuel Macron and FIFA chief Gianni Infantino.

Infantino has promised the month-long tournament will see the “explosion” of the women’s game, with almost a million tickets sold so far for matches in the nine host cities.

On an emotional opening night, Henry said she and her teammates had been “close to tears” as the national anthem played before kick-off.

“I could not have dreamed for more than this,” Henry said.

France coach Corinne Diacre struck a note of caution as she warned: “This is just one step. We have six more to go and we need to keep our feet on the ground and keep working hard.” It was a fine start for France and the tournament with a carnival atmosphere as the French showed their credentials having been set the target by their own federation of going all the way to the final in Lyon on July 7.

The problem for Diacre’s team, ranked fourth in the world, is that, if they win their group, they could well end up facing reigning champions the United States back in Paris in the quarter-finals.

The USA, whose legal battle to be paid the same as their male counterparts has made waves in the run-up to the tournament, start their campaign against Thailand on Tuesday in Reims.

Germany are ranked second in the world behind the United States. They are bidding to lift the trophy for the third time after previous triumphs in 2003 and in 2007.

They are hoping to get off to a winning start as they take on the Chinese in Group B in Rennes at 1300 GMT on Saturday.

China reached the final in 1999 but, two decades on, the prospects of a repeat run seem remote, even if Paris Saint-Germain’s Wang Shuang will be one of the players to watch.

“It is always in the back of your mind that, alongside the USA, Germany used to be the leading country in women’s football,” Germany forward Svenja Huth told AFP.

“Nowadays, there are eight or nine teams who can be world champions. England, Holland and France have developed amazingly in recent years. It is going to be tough, but we can win it.” Later on Saturday, in the same group, Spain take on South Africa in the northern port of Le Havre at 1600 GMT, with the Banyana Banyana hoping to make a big impression in their first World Cup appearance.

They lost on penalties to Nigeria in the final of the last Africa Women’s Cup of Nations.

Nigeria are in France’s Group A, and the Super Falcons face Norway in Reims in the final game of the day at 1900 GMT.

The Norwegians are confident of going far despite being without Ada Hegerberg, the winner of the women’s Ballon d’Or winner for the world’s top player.

The striker, who scored a hat-trick in Lyon’s Champions League final win over Barcelona last month, refused to come to the tournament due to a dispute with her national federation, which she accuses of failing to respect women players.

In a match on Saturday, defensive midfielder Giulia Gwinn scored the only goal as Germany opened their World Cup campaign with a 1-0 victory over China in Group B.

The Germans scored the only goal of the match in the 66th minute. The Chinese cleared a corner to the top of the penalty area where Freiburg’s Gwinn had time to take a touch before smacking a shot that curled between the on-rushing Yang’s legs and into the corner of Peng’s net.

England and Brazil, both seeking to win the women’s global title for the first time, enter the competition on Sunday, facing Scotland and Jamaica respectively.