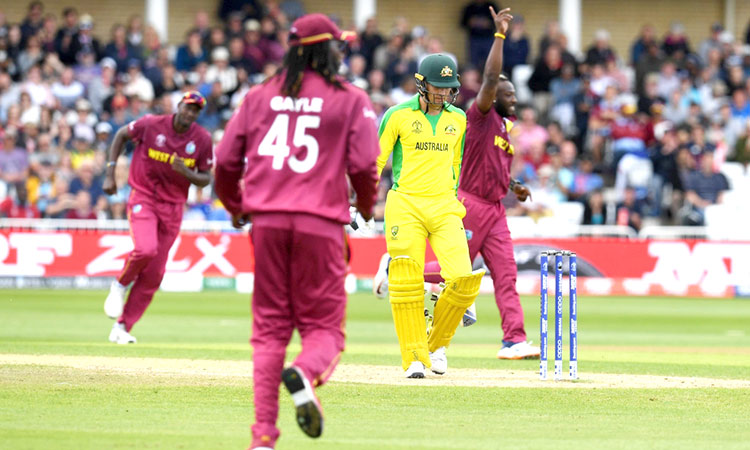 Andre Russell (R) celebrates the wicket of Alex Carey (2R) for 45 during the group stage match at Trent Bridge on Thursday. AFP

West Indies won the toss and elected to bowl against Australia in Thursday's World Cup match at Trent Bridge.

Windies captain Jason Holder was boosted by the presence of Chris Gayle and Andre Russell in his starting line-up after his two key players were declared fit.

Russell was the orchestrator of the West Indies' win over Pakistan with a spell of fierce pace bowling, while Gayle's typically attacking half-century finished off the win.

Russell left the field shortly before the end of Pakistan's innings with knee trouble, while Gayle was seen feeling his lower back and walked gingerly back to the pavilion upon his dismissal.

But both were able to face Australia, with Evin Lewis coming in for Darren Bravo in the only change.

"I think our fast bowlers can extract whatever is in the wicket early on. The nature of the wickets in England is that they don't change very much," Holder said.

"We just have to remain disciplined and remain aggressive like we were in our first game against Pakistan."

Australia were unchanged from the team that beat minnows Afghanistan in their opener.

Captain Aaron Finch claimed he was happy to have been put into bat, saying: "I probably would have had a bat first anyway, it looks dry and hopefully it will spin later. We are starting to take the key moments in games."