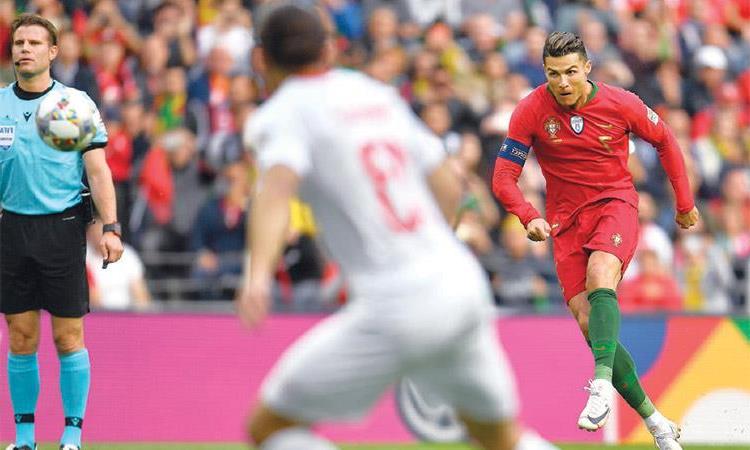 Portugal manager Fernando Santos hailed Cristiano Ronaldo a “football genius” after his 53rd career hat-trick sent Portugal into the final of the Nations League on home soil in Porto with a 3-1 win over Switzerland.

The hosts had to withstand a huge moment of VAR controversy as after Ronaldo’s free-kick opened the scoring, Portugal thought they had the chance to double their lead from the penalty spot.

However, Ronaldo predictably took centre stage as he struck twice in the final two minutes.

“I was his coach in 2003 and I could see where he’d go,” said Santos. “He’s a genius. There’s genius paintings and sculptures and he’s a football genius!”

However, the five-time Ballon d’Or winner returned to the national team in March and was always likely to be the centre of attention.

The Portugal captain is however no longer his country’s only star name, with Bernardo Silva starring for Manchester City where he could soon be joined by Joao Felix.

City are reportedly set to pay Felix’s $135 million buyout clause from Benfica, but the 19-year-old missed a glaring chance to mark his international debut with a goal just before the break as he blasted over from Ronaldo’s pass.

Rodriguez drilled home the resultant spot-kick much to the fury of the home supporters at the Estadio do Dragao.

The Swiss could then have gone in front when Benfica forward Haris Seferovic headed just wide. By contrast, Portugal had one of the deadliest finishers in football history on the end of their chances.

“Congratulations to Portugal. They had street smarts, they had the cherry on top of the cake and that made the difference. Four shots, three goals,” said Switzerland coach Vladimir Petkovic.

Silva was the creator for Ronaldo to drill home his second of the night two minutes from time.

Moments later the hosts sealed their place in the final on the counter-attack as Ronaldo curled into the far corner for his 88th international goal.

Meanwhile, a rape lawsuit filed in the United States against Ronaldo has not been dropped, the plaintiff’s lawyer said on Wednesday, dismissing a report to the contrary.

“The charges were not dropped,” said Larissa Drohobyczer, attorney for Kathryn Mayorga, who claims she was sexually assaulted by the Portuguese soccer star in a Las Vegas hotel in 2009.

A Bloomberg report that the case had been dropped stemmed from the filing of a notice of voluntary dismissal last month in Nevada state court in Las Vegas.

“The state case was dismissed by us because we filed the identical claims in federal court due to federal court’s rules on serving foreigners,” Drohobyczer said.

“We basically just switched venues but the claims remain.”

Ronaldo, 34, the former Manchester United and Real Madrid player, has strongly denied the accusations against him.

Mayorga, 35, said last year that while she had agreed to a financial settlement with Ronaldo shortly after the alleged incident, her emotional trauma at the time did not allow her to participate in the mediation process.

Ronaldo is one of the biggest stars of world football and is a five-time winner of the Ballon d’Or award for the world’s best player.