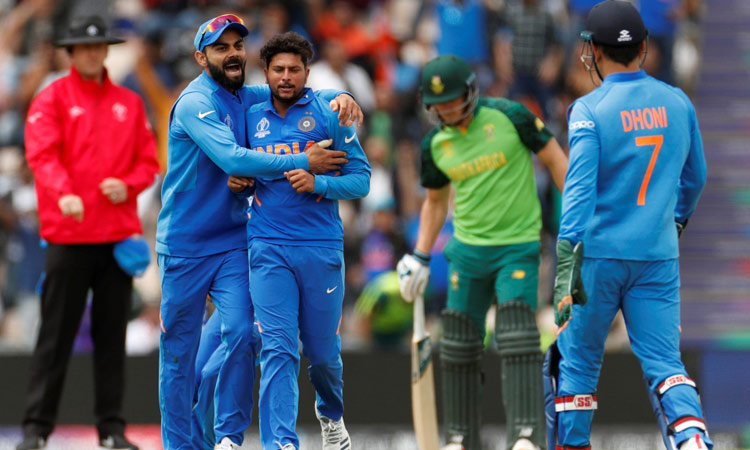 India launched their World Cup campaign with a six-wicket win over South Africa at Southampton on Wednesday as the Proteas suffered their third defeat in as many matches this tournament.

South Africa captain Faf du Plessis won the toss and batted but a superb double strike by Jasprit Bumrah left his side reeling.

India leg-spinner Yuzvendra Chahal then took four wickets in a meagre total of 227 for nine.

India, with Rohit Sharma, dropped early in an innings of 122 not out — the highest individual score of the tournament to date —took their time over the chase before winning with 15 balls to spare.

India's spinners plunged South Africa deeper into trouble in their World Cup match in Southampton on Wednesday, backing up paceman Jasprit Bumrah, who did the early damage.

Earlier, leg-spinner Yuzvendra Chahal struck twice in one over, grabbing the prized scalp of skipper Faf du Plessis for 38 to leave the Proteas in desperate trouble.

Chahal bowled Rassie van der Dussen for 22 with the first ball of his second over to end a 54-run third-wicket partnership for South Africa.

The wrist spinner then bowled Du Plessis to send a crowd dominated by Indian fans wild.

Spin partner Kuldeep Yadav also chipped in with the wicket of JP Duminy, trapping the batsman lbw for three as South Africa slipped to 89-5.

South Africa inched their way to 112-5 at the end of the 28th over, with David Miller and Andile Phehlukwayo battling on.

Bumrah, the world's top-ranked one-day international bowler, had the ball darting around on a cloudy morning in Southampton as he sent back Hashim Amla for six.

Amla, who missed South Africa's previous match against Bangladesh, defended a delivery with extra bounce from Bumrah but got an outside edge that was caught at second slip by Rohit Sharma.

Bumrah then struck again in his next over, with Quinton de Kock, who made 10, edging to skipper Virat Kohli at third slip, meaning South Africa were two down for 24.

South Africa have been hit by a spate of injuries, with pace spearhead Dale Steyn making an early exit from the tournament without playing a game.

India, among the tournament favourites, are playing their first game in the round-robin event that concludes on July 14 in London.