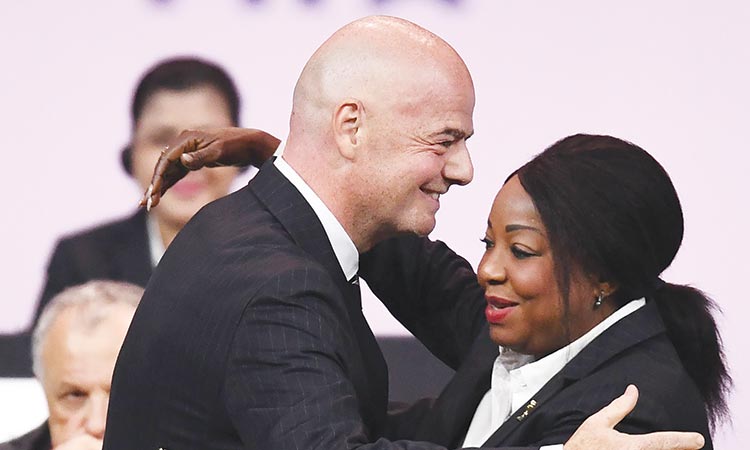 FIFA president Gianni Infantino said he had turned FIFA into an organisation “synonymous with credibility” as he was re-elected for a second term as president of world football’s governing body.

It was a formality that the 49 year-old would be waved through for a new four-year mandate, until 2023, as he stood unopposed at the FIFA Congress in Paris.

The FIFA Council chose to back his re-election by acclamation, with Infantino now hoping to build on the work he started in February 2016, when he was voted in to succeed the disgraced Sepp Blatter at the head of the organisation.

Eager to “open up” and “globalise” the game, he will now push ahead with already approved plans to expand the Club World Cup to 24 teams, and with his ambition of expanding the World Cup itself to 48 teams.

As he addressed the 211 members of the Congress in the French capital, where the Women’s World Cup begins on Friday, Infantino claimed credit for the success of the 2018 men’s World Cup in Russia, the “transparent” bidding process for the 2026 tournament and the introduction of Video Assistant Referees into the game.

He said he was now at the head of “a new FIFA, an organisation that is synonymous with credibility, confidence, integrity.

“The very least we can say is that we have turned the situation around.

Infantino has overseen a major increase in FIFA’s income, with cash reserves increasing from $1 billion to $2.75 billion over his first term.

“FIFA has today also the most solid financial situation ever and is coming out of the period of its worst crisis,” he claimed.

FIFA have had to abandon highly controversial plans to expand the World Cup from 32 teams to 48 in time for the next tournament in Qatar in 2022.

The radical change to the tournament will now have to wait until 2026, but Infantino has already got the green light for a flagship 24-team Club World Cup starting in 2021.

Infantino believes his new Club World Cup could generate as much as $50 billion in commercial income when it starts in 2021.

Infantino also said he would welcome a Chinese bid to stage the 2030 World Cup after the country was named to host the Asian Cup in 2023.

Qatar will host the 2022 finals, before a joint North American tournament in 2026 in Canada, the United States and Mexico. Bids from South America and Europe, including potentially from Britain and Ireland, have been mooted for what should be a 48-team competition in 2030.

“For me, as FIFA president, the more the merrier. The more bidders we have the happier I am,” said Infantino shortly after being re-elected by acclamation for a second term as president at the FIFA Congress in Paris.

In the past it has been FIFA policy for the different continents to take turns hosting the finals, and Infantino even said he wasn’t sure if a Chinese bid would be considered for 2030, just eight years after it goes to Qatar.

However, China’s football fan President, Xi Jinping, has stated his aim for the country to stage the showpiece one day, with 2030 and 2034 often mentioned as possibilities. It was announced as the host of the 2023 Asian Cup on Tuesday.

“We will discuss it in the coming months, including at the next FIFA Council in October in Shanghai, and there we will put down some markers in terms of timing and so on,” Infantino said.