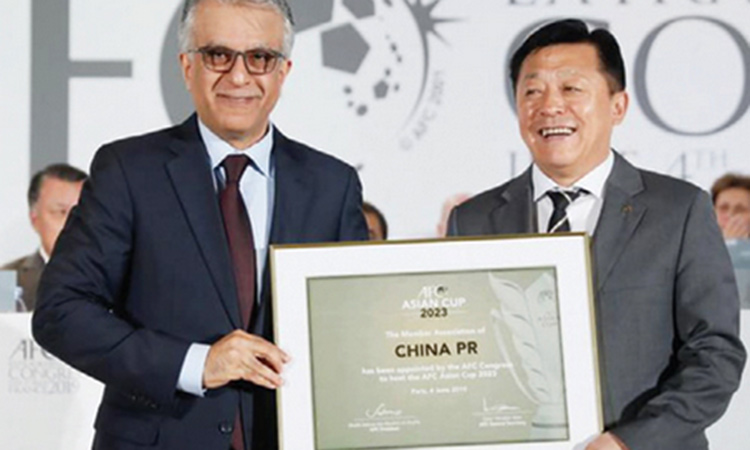 It will mark the second time China has hosted the quadrennial continental tournament, after the 2004 edition when they finished runners-up to Japan.

Asia’s football chief Sheikh Salman Bin Ebrahim Al Khalifa said Tuesday that China’s staging of the Asian Cup would serve as a “launchpad” for the country’s teams of the future.

“This is an important moment for football in Asia and beyond,” said Sheikh Salman, FIFA’s second-in-command, who was reelected to a fresh four-year term as AFC president in April.

“Football has the chance to unlock the potential that exists in the world’s most populous country.

“We have seen the rise of the game under the direction and investment of the Chinese government. “Now, we have the chance with this Asian Cup to develop a sure legacy for the global game. “The Asian Cup can provide a launchpad for the great Chinese football teams of the future and more importantly can place football as the number one sport in the country.”

“It’s great for China, a great honour for China to be hosts of the 2023 Asian Cup. We are ready and confident of staging a successful tournament,” Chinese FIFA Council member Du Zhaocai said at the AFC Extraordinary Congress in Paris.

Last month South Korea abandoned their bid to stage the tournament, leaving China as the sole candidates with a free run to become hosts.

Thailand and Indonesia had also previously expressed interest in hosting the 2023 event, but had dropped out earlier.

China’s football fan President Xi Jinping has stated his aim for the country to stage the showpiece World Cup one day and wants the country to become a major force in the sport.

China, who have only qualified once for the World Cup in 2002, are ranked a lowly 74th in the world in FIFA’s rankings, sandwiched between Panama and Cape Verde. This year’s Asian Cup in the UAE was expanded to 24 nations for the first time with Qatar winning the final 3-1 against Japan.

Meanwhile, The hosts of the next World Cup Qatar will stage the Club World Cup in 2019 and 2020, FIFA announced on Tuesday.

The Middle-Eastern state will use the two tournaments as logistical tests for stadiums and infrastructure ahead of the 2022 edition of the international competition which takes place every four years. 2020 will be the final time only seven sides will participate in the annual club event before it is expanded to 24 teams a year later.

After winning the right to host a 32-team World Cup in 2010, in a bidding process mired in bribery allegations, the Qataris are coming under sustained pressure to switch to 48. The country won its first ever Asian Cup title in February acting as a riposte to critics who long ridiculed the 2022 World Cup host for its lack of footballing prowess.