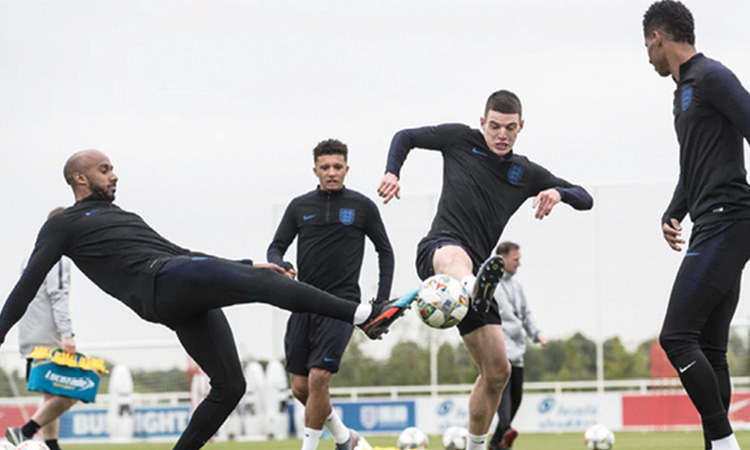 England players attend a training session. They will face Netherlands in a semi-final match of the Nations League on Thursday.

After a season of unparallelled dominance for English clubs in European competition, it is England’s national team’s turn to follow suit as they aim to win the inaugural Nations League in Portugal this week.

On the back of a run to the World Cup semi-finals for the first time since 1990 last summer, England have momentum ahead of their semi-final against a resurgent young Dutch side on Thursday.

But manager Gareth Southgate still has both long and short-term concerns.

He admits it will be a tough test of his management to make quick decisions on which of his players involved in Saturday’s Champions League final, that saw Liverpool triumph over Tottenham, he will use.

Seven players in total from the two Champions League finalists are included in Southgate’s 23-man squad, with the biggest question mark over England captain Harry Kane.

The World Cup golden boot winner made his return from a two-month injury layoff due to ankle ligament damage, but looked well short of match fitness in Madrid.

Southgate must also try to raise Danny Rose, Dele Alli and Eric Dier from the disappointment of their final defeat, while Liverpool captain Jordan Henderson, Trent Alexander-Arnold and Joe Gomez will bounce down to Burton to meet the squad on Monday after a long day of celebrations as the Reds paraded their sixth European Cup to delirious fans on Merseyside.

“We have got to make a quick but accurate assessment on where they are over those few days,” Southgate said when naming his squad.

“It will be a very individual thing having played in such a big game.”