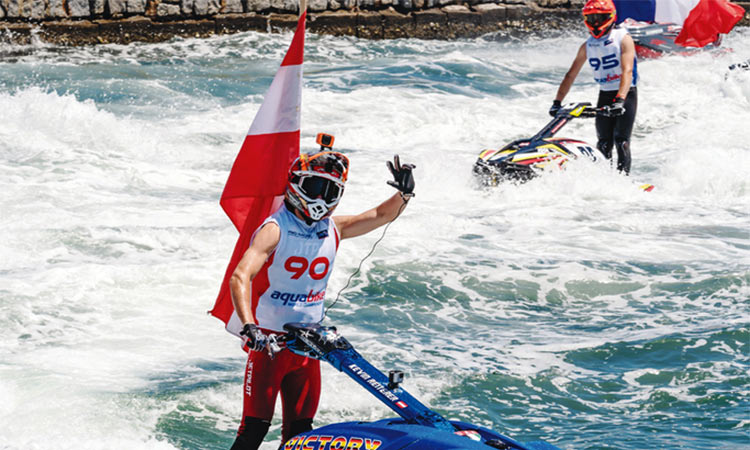 Victory Team’s Kevin Reiterer celebrated after winning Round Two of the UIM-ABP Aquabike World Championship in Olbia on Saturday.

Two-time world champion Kevin Reiterer from Victory Team kept his position at the top of the pack with two strong and fine finishes at the Grand Prix of Italy – Round Two of the 2019 UIM-ABP Aquabike World Championship, in Olbia, on Saturday.

Starting from second on the grid in the Ski GP1 category, Reiterer’s plans for dominance took an unfortunate turn after he and pole-sitter Quinten Bossche collided with their skis at the very start of the race. While the Belgian rider continued unaffected in front of the pack, Reiterer had to opt for an alternate jet-ski while consequently re-starting the first moto from 19th place.

The 26-year-old from Austria, who was crowned a world champion at the end of December last year in his first season with Victory Team, had finished the mandatory 15-minute qualifying session on Friday. However, Bossche’s time of 1:30.92 minutes was the best for the evening, while leaving defending champion Reiterer second best with an effort of 1:31.60, while Antoine Goethals had come in third.

Bossche led for all ten laps, followed by countryman Goethals during nine laps till he dropped back and finished in sixth position. Bossche took the chequered finish flag to win by well over 33 seconds, and despite a post-race 30 seconds time penalty for not maintaining his line, Bossche managed to ease through for an outright moto win by 4.69 seconds.

But it was Reiterer who was the star of the first moto as the Victory Team rider made his way through the crowded pack from 19th place to ultimately finish in second place and take vital points in the overall standings. Benjamin Scharff came home in third ahead of Barnabas Szabo, while Mickael Poret was fifth.

In the second moto held later in the evening, there was no stopping Reiterer as the 26-year-old battled neck and neck against Bossche before overtaking his challenger with the final two laps remaining. After that there was no turning back as Reiterer went on to assert his class finishing a clear 11.70 seconds clear of the chasing Bossche, while Mickael Poret finished in third more than a lap away. The defending champion took his revenge and turned the tables on rival and Moto 1 winner Bossche to take his fourth Moto win of the year, the pair tied on 47 points heading into the deciding Moto.

The battle for the win in Ski was a classic between the defending and a former champion.

“After that incident in the first moto, I needed to show what I was capable of out there on the water. I liked the way my ski responded and I have my Victory Team crew to thank,” an excited Reiterer said after the second moto.

“We have one more moto tomorrow and that will be another tough test for us all. I am ever more confident of what we can achieve as a top-class operation,” he added.

After Saturday’s two motos, Reiterer continues at the top of the overall standings with 122 points, followed by a handful of riders led by Norway’s Daniel Svae Andersen (79 points), Axel Courtois (76), Barnabas Szabo (71) and Anders Keller (69).

A brilliant third place in Moto 2 went to Mickael Poret after holding off Barnabas Szabo, the duo tied on 36 points heading into the decider, with Stian Schjetlein and Ulrik Berntsen rounding out the top six.

Hammadi made a sensationally start from fourth moving up three places to lead at the end of lap 1 from pole sitter Andrea Thiessen and held him off for six laps when a mistake by the Dane cost him a place with Ivancic moving into second.

The young UAE rider held off the next challenger and going to complete the 9 laps and win by 2.28s, Ivancic in second ahead of Thiessen, who was later disqualified for invading the alternate course, elavating Guidi a place.