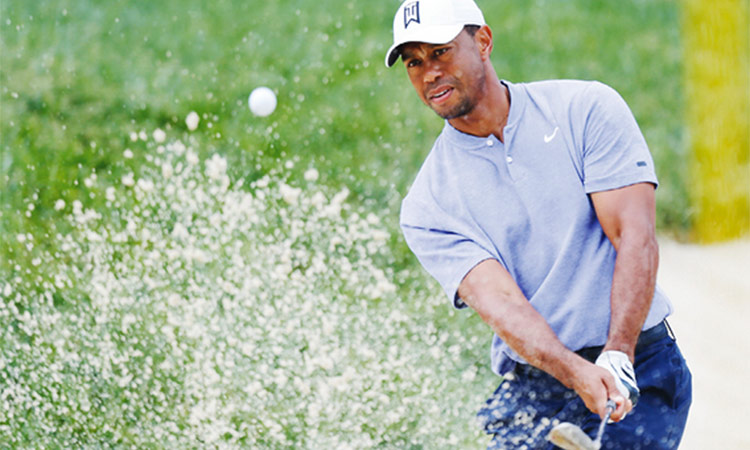 Tiger Woods hits from the sand on the 13th hole during the first round of the Memorial golf tournament in Dublin on Thursday. Associated Press

Former world number one Woods, playing for the first time since missing the cut at the PGA Championship, made birdies at two of his three closing holes to stay within shouting distance of Moore, who carded a seven-under 65.

The 43-year-old Woods, a five-time winner at Memorial, could equal Snead’s record of 82 PGA Tour wins with a victory this week at Muirfield Village in Dublin, Ohio.

The 15-time major winner, who crowned his comeback from a nearly two-year injury layoff by winning the Masters in April, looked comfortable throughout Thursday’s first round.

After teeing off on the back nine, Woods made a fast start with a birdie on the par-5 11th hole, drilling his third shot to eight feet and then draining the putt.

A bogey checked his progress on his fourth hole of the round, the 13th, before a run of nine straight pars. A birdie followed by a bogey on the fifth and sixth holes threatened to leave Woods at level par for the day, before he birdied seven and eight.

A smiling Woods was satisfied with his round, although he said he could have made better use of the soft conditions.

“It was one of those days where it could have easily flipped,” Woods said.

Moore, a native of the rainy Pacific Northwest, said the rain softened course suited him.

The 36-year-old cut loose with a dazzling display over the front nine of his round, reeling off four consecutive birdies to reach the turn at five under. Two more birdies and seven pars down the stretch completed the world number 79s best round ever at Muirfield.

Moore, who claimed the most recent of his five tour titles in 2016, said putting consistency was the key to his stellar round.

He made 16 of 16 putts inside the 10-feet range on Thursday, including a birdie putt at the par-3 fourth that lipped all the way around the cup before dropping in.

“I don’t think I’ve ever seen a ball go that far around the hole and go in,” Moore said.

Elsewhere on Thursday, Jordan Spieth made a charge up the leaderboard to finish one behind Moore with a 66.