Stokes stars as England kick off campaign with win over S.Africa - GulfToday

Stokes stars as England kick off campaign with win over S.Africa 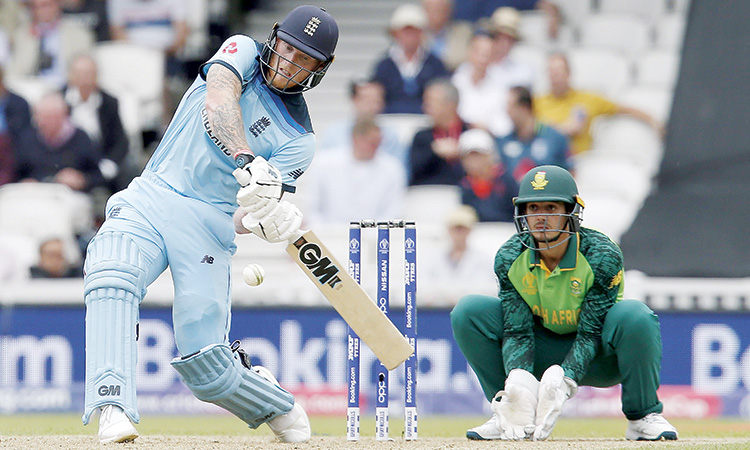 England’s Ben Stokes (left) hits a shot at The Oval in London on Thursday. Agence France-Presse

Opener Quinton de Kock’s valiant 68 run effort and Rassie van der Dussen’s half-century went in vain as South Africa succumbed at 207 runs in reply to England’s 311 in the tournament opener of the ICC Cricket World Cup 2019 at the Kennington Oval in London on Thursday.

It was some disciplined bowling by the hosts which helped them garner an impressive 104 run win as Jofra Archer picked three wickets while conceding 27 runs from seven overs while Liam Plunkett and Ben Stokes also supported him by bagging a couple of wickets each as the trio dismantled the Protean middle order.

Chasing the target, South Africa openers de Kock and Hashim Amla (13 off 23) started cautiously, putting 10 runs on board in the initial three overs before the latter was hit by a Archer delivery in the fourth over and had to depart.

Aiden Markram (11 off 12) then added 26 runs with de Kock before departing as Archer’s delivery took a thick edge and Joe Root made no mistake in collecting it at the slips. Archer again jolted the Proteans as he packed back skipper Faf du Plessis (5 off 7) in the 10th over, leaving the visitors at 44/2.

De Kock and Dussen then anchored South Africa’s innings with a crucial 85-run partnership, taking their side past the three-digit mark in 20.1 overs. Breaking up the developing partnership, Plunkett came with a major breakthrough in the 23rd over as he sent back a well-settled de Kock when South Africa were at 129.

With the addition of just 13 runs, South Africa lost Jean-Paul Duminy (8 off 11) and things turned worst for them when incoming batsman Dwaine Pretorius also departed after contributing with a run. South Africa then suffered a middle-order collapse as Dussen, Andile Phehlukwayo (24 off 25), and Kagiso Rabada (11 off 19) also fell.

South Africa could only manage another 79 runs in 39.4 overs even as Amla returned to the middle but couldn’t do much as he too departed on individual score of 13 runs.

Ben Stokes then performed the last rites as he accounted for the wicket of Imran Tahir (0).

Earlier, failure of the England batsmen to convert starts saw them post 311/8. Riding on fifties from Jason Roy (54), Root (51), Eoin Morgan (57) and Stokes (89), the hosts ensured that the failures of Jonny Bairstow and Jos Buttler didn’t hurt them too much. The South African bowlers though put on a quality show in the second half of the innings to claw their way back into the game.

Winning the toss, South Africa skipper du Plessis decided to bowl and leg-spinner Imran Tahir reposed the faith shown in him by his skipper as he sent back Bairstow off the second ball of the opening over.

The first spinner to open the bowling in the history of the World Cup, Tahir used the googly to great effect as he took the edge of the bat and de Kock did the rest.

The early dismissal of Bairstow (0) brought Root to the crease and with Roy for company, the Englishmen started to stitch a partnership. Not just focusing on the boundaries, both Roy and Root looked to keep the scoreboard ticking as they reached 60/1 in the first 10 overs.

Putting on a quality 100-run partnership, it looked like the duo would run away with the game when Phehlukwayo dismissed Roy against the run of play, caught by du Plessis. Walking in at number four, Morgan made his intentions very clear as he hit the second ball that he faced from Phehlukwayo for a boundary.

But even before the duo could strike a partnership, Rabada sent back Root as a casual sliced drive off his bat found Duminy at backward point. While the Proteas players celebrated the fall of the second English wicket in four balls, it was also the start of another quality partnership between Morgan and Stokes.

As the duo mostly looked to pick the singles in the middle-overs, Morgan took special liking for Lungi Ngidi in the 26th over and hit the pacer for back-to-back sixes to bring up 7,000 runs for himself in ODI cricket for England. Playing his 200th ODI for England, the skipper couldn’t have asked for a better moment to reach the landmark.

Even though Morgan looked his fluent self, it took Stokes some time to open up and the 36th over of the innings saw him get stuck into Pretorius as he picked up three boundaries from the pacer’s over to also bring up his own fifty. It was the first time that four English batsmen had scored a fifty in a single World Cup game. But just when it looked like England would run away with the game, South Africa struck again.

With the pacers failing to create an impact, du Plessis turned back to Tahir and the wily old fox struck again as his flighted leg-spinner got Morgan to go for the swing and the English skipper failed to connect well as Aiden Markram completed a brilliant catch running in from long-on. The scoreboard read 217/4 in the 37th over as Buttler walked into the crease.

The crowd was already in anticipation for another whirlwind finish, but it wasn’t to be on Thursday as Ngidi cleaned him up with a slow bouncer that the batsman dragged onto his stumps in the 42nd over. Buttler (18) failed to read the pace of the ball and played his shot a tad bit early.