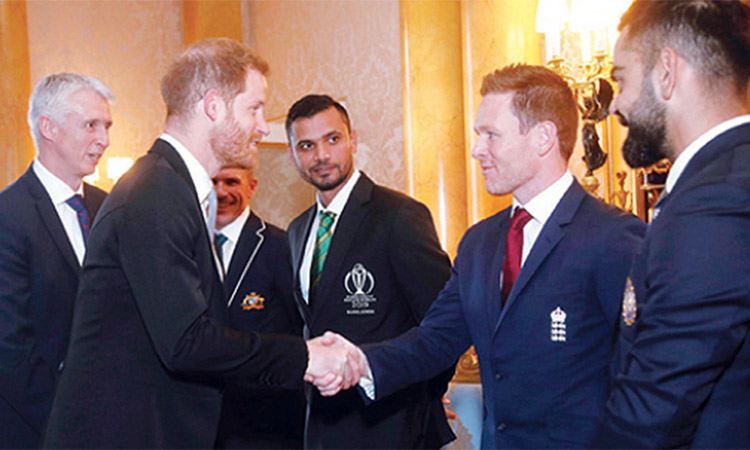 London: Prince Harry, the Duke of Sussex, stoked the fierce cricketing rivalry between England and Australia by making a cheeky sledge at Australia captain Aaron Finch ahead of the ICC Cricket World Cup.

“You’re getting on a bit now, aren’t you? How long have you been playing?” express.co.uk quoted the Duke of Sussex as asking Finch, making him laugh during a team captains’ reception at the Buckingham Palace on Wednesday evening.

The 32-year-old Australian batsman took the remark sportingly and told Harry that he had been playing for eight years at the highest level. However, he left Harry bemused when he replied to the duke’s query about the favourites to win as: “England and India.”

Harry, 34, also told the Sri Lanka captain Dimuth Karunaratne: “Enjoy it, if you’re not going to enjoy it you might as well not be here”.

Queen Elizabeth also met the captains ahead of a garden party at the palace ahead of the tournament which begins with a much-anticipated match to be played between hosts England and South Africa at The Oval.

Earlier in the evening, the World Cup 2019 got officially underway with a cracking opening ceremony at the iconic Mall in London.

Meanwhile, as the contest to replace her as prime minister gathered pace on Thursday, Theresa May opted for a different battle - watching England take on South Africa in the opening match.

An emotional May announced last week she would step down as Conservative Party leader on June 7 after three times failing to get her Brexit deal approved by parliament.

Free from the burden of trying to deliver Britain’s exit from the European Union, a relaxed-looking May gave a speech on student funding before heading to the Oval cricket ground around two miles from her Downing Street residence.

The British leader was photographed applauding from the stands during the unannounced trip, as her would-be successors toured the television studios setting out their plans for the country.

May, who once likened her resolve to see her Brexit plan through to the determination of her cricket hero Geoffrey Boycott to get runs, has long been a lover of the sport.