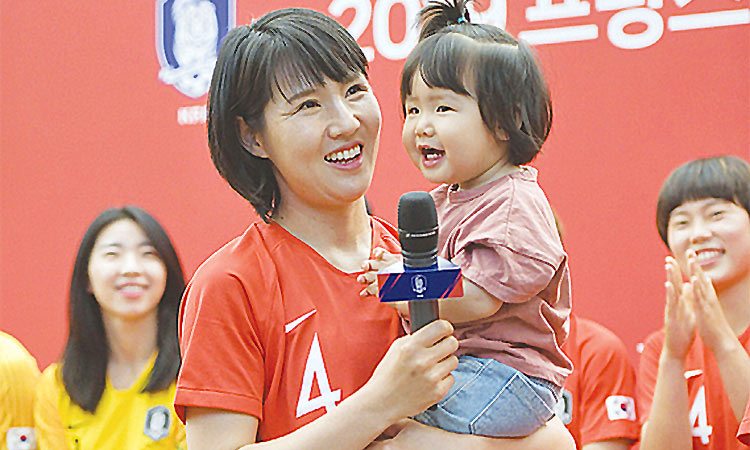 In a country where the gender pay gap remains high, and marriage and child-rearing can cripple a woman’s career, Hwang is the only wedded woman in the squad and its oldest member at 31.

It will not be the first time her personal life has made World Cup headlines: husband Lee Du-hee popped the question on the pitch after South Korea drew with Costa Rica in Montreal at the last edition in 2015. Their daughter Bom was born 14 months ago. Few expected Hwang to return to the WK League, South Korea’s top-tier women’s football competition, where only one mother -- now retired -- had played before.

But after her club Hwacheon KSPO restored her to the side in December, she made her national team comeback in April and this month she was named in the World Cup squad.

“Training has been very hard” since having a child, Hwang said before leaving for pre-tournament camp in Sweden, “because I have to set a good example”.

“So I made no excuses, hid my emotions and trained harder.”

South Korea is Asia’s fourth biggest economy and a regional sporting power, one of only two Asian countries -- alongside Japan -- to have hosted both summer and winter Olympics.

Mothers and married women often face discrimination, with many companies reluctant to employ them, doubting their commitment and fearing they will not put in the long hours that are standard for South Korean workers.

The country’s gender pay gap is the highest among developed economies, with working women only making 63 percent of what men earn.

Kim Shin-wook, the best-paid player in the men’s K League 1, earned 1.6 billion won (US$1.4 million) last year. But the upper salary limit for women players in the WK League was just three percent of that, at 50 million won.