From Ronaldo to Roma: Serie A’s tops and flops - GulfToday 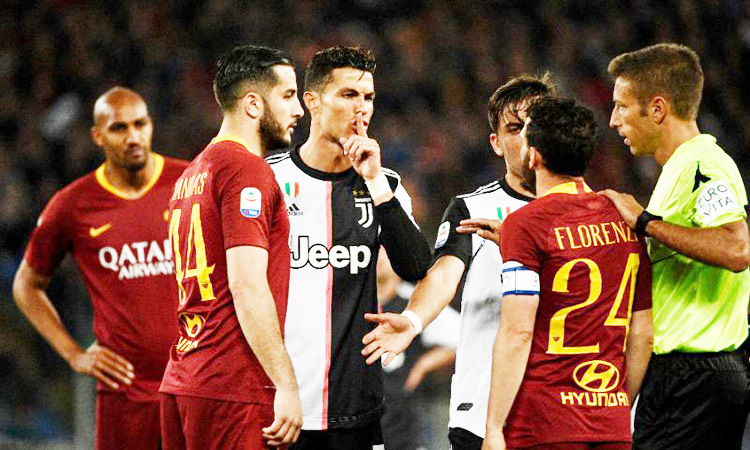 AFP Sport looks at the tops and flops of the league campaign in Italy:

Tops: Ronaldo keeps Juve at summit Cristiano Ronaldo’s surprise arrival from Real Madrid for 100 million euros ($115 million) last summer was hailed as the final piece in the jigsaw to bring the Champions League title back to Turin. The 34-year-old’s presence was not enough to finally end the team’s 23-year Champions League wait, but he played a key role in their run to the Scudetto with a record-equalling five games to spare, leading the way as the team’s top scorer with 21 league goals in 31 games, but missing out on the top scorer crown.

Quagliarella renaissance Sampdoria veteran Fabio Quagliarella had an unprecedented season at the age of 36, after much of his earlier career was blighted by a harrowing nightmare involving a stalker. The striker finished the season as the Serie A top scorer with 26 goals, three better than Duvan Zapata. Quagliarella last January equalled Gabriel Batistuta’s mark of scoring in 11 straight games, achieved by the Argentine in 1994. His bid to overtake the record ended with a 3-0 defeat at his former club Napoli, but his stunning form earned a recall to Roberto Mancini’s Italy after nine years out, becoming the oldest player to score for the national side in March.

Atalanta join the big boys Unheralded Atalanta have been the standout team of the season with a first-ever Champions League qualification in the club’s 111-year history.

The team’s high-pressing style of Football, often compared to Dutch side Ajax this season, stands out from the slower game favoured in Serie A. The team had the best strike force in Serie A with 77 goals scored, more than Juventus, spearheaded by Duvan Zapata, Papu Gomez and Josip Ilicic.

Flops: Not vintage Roma year This season was not a vintage one for Roma as last season’s Champions League semi-finalists struggled for consistency.

Eusebio De Francesco was sacked after the club’s European exit to Porto in the last 16 with former coach Claudio Ranieri seeing out the last three months of the season in which they finished sixth.

“It’s like in wine-making: the vineyard can do the same work over and over but there will be years when the wine they make is marvellous and others when it’s not how they’d like,” said Ranieri.

The team were also humiliated 7-1 by Fiorentina in the Coppa Italia, capping a disappointing season with a tearful farewell by captain Daniele De Rossi, after club bosses did not renew his contract. “It was a bolt from the blue for me, as it was for him,” said Ranieri of the news of De Rossi’s departure after 18 years and over 600 games.

Icardi soap opera unsettles Inter Stripped of the Inter Milan captain’s armband, much of Mauro Icardi’s season resembled a soap opera. Inter’s campaign started positively, back in the Champions League after a seven-year absence. They narrowly missed out on the last 16 but were comfortably on track for a return to Europe’s elite in the league. But after reportedly being fined 100,000 euros by the club in January for returning to Italy late after the winter break, Icardi spent 53 days on the sidelines after being replaced as captain by Samir Handanovic amid a contract dispute. The joint top scorer in Serie A last season with 29 goals, he scored 11 times this term. Inter finished fourth with Icardi’s future at the club uncertain.

Chievo’s unwanted record Relegated Chievo ended a miserable Serie A season in the worst possible fashion when they set an embarrassing points record thanks to a drab goalless draw at also-down Frosinone.

Chievo, who had three points deducted for false accounting before the start of the season, ended the campaign with 17 points. That is the lowest in the three-points-for-a-win era since the league returned to 20 teams in 2004.

The Flying Donkeys, who drop down to Serie B after 11 years in the top flight, gathered one point less than Pescara did in 2016/17.