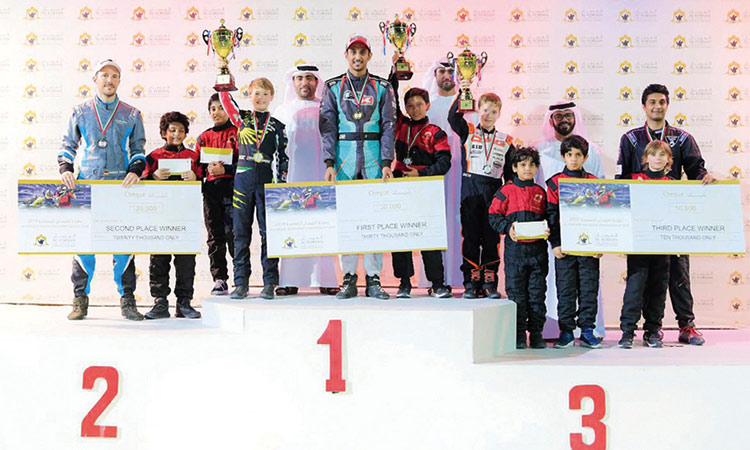 Winners of the different categories of the karting competition pose with the officials during the presentation ceremony.

The third round of the Karting competition held during the inaugural Al Forsan Ramadan Championship concluded on Saturday. The tournament, which started on May 22 May at the Al Forsan International Sports Resort Circuit, witnessed enthusiastic drivers in both adults and kids’ categories racing to achieve remarkable results.

Matar dominated the proceedings from the begining and didn’t gave much room to his rivals.

In the U-12 karting competition, Harry Hannam from the UK raced into the first place, with French drivers Nathan Port and Icho Seghry finishing second and third respectively.

Twenty drivers qualified for the finals in the adult category, while 10 participants qualified for the U-12 group finals. The final round of the race saw heated competitions in both the categories, as the drivers showcased their increasingly competitive skills at every stage of the event.

As the final day came to an end, Ahmed Saleh Al Hemeiri, Director of the Municipal Community Centr, and Khalifa Al Hemeiri, CEO of Al Forsan Holding, handed over the prizes to the winners.

A prize money of Dhs70,000 was awarded to the first three winners of both the categories.

“The karting competition held during the inaugural Ramadan championship has been a huge success. Therefore, we at the resort have decided to organize similar local, regional and international tournaments in the coming years”.

“This was the first ever championship to be organised by Al Forsan Resort during the Holy Month of Ramadan. The championship will continue to grow in the coming years as Al Forsan is keen to contribute to the development of sports in Abu Dhabi in particular and the UAE in general.

He added: “What distinguishes this championship is that it coincides with the Year of Tolerance. We have derived the values of tolerance from the Arab traditions and culture of the UAE, a country shaped by the vision of our founding father, the late Sheikh Zayed Bin Sultan Al Nahyan.”