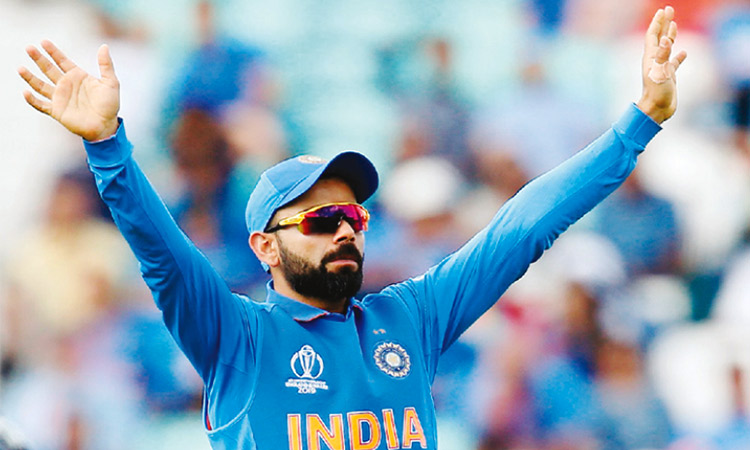 Virat Kohli’s reputation as one of cricket’s great entertainers is well-established, but the India star will not be completely satisfied until he leaves an indelible mark by winning the World Cup as captain.

Kohli has been instrumental in building on Indian cricket’s rich legacy after taking over the captaincy from Mahendra Singh Dhoni.

After helping India reclaim the number-one Test ranking, the 30-year-old led his team to a first-ever Test series triumph in Australia in January.

But it is the possibility of winning the World Cup as skipper that most inspires the flamboyant batsman, who has amassed 10,843 runs in 227 one-day international matches, including 41 centuries and 49 fifties.

Kohli still fondly remembers being part of the 2011 World Cup-winning team under Dhoni, who lifted the title on Indian soil, and would love to emulate his predecessor by leading his country to their third world title.

“I would put the win in Australia at a par with the World Cup. Look, you cannot place a World Cup win below anything else,” Kohli told the Times of India newspaper before departing for the tournament in England and Wales.

“It is a global tournament and the significance and the charm of the tournament is something else. It is always going to be the most important tournament in world cricket.”

Kohli defied critics who had questioned his poor showing on the team’s 2014 tour of England by hitting 593 runs, including two hundreds, in the five-Test series last year.

But India still crumbled to a 4-1 defeat, showing he cannot will the side to victory on his own.

Kohli’s captaincy has often been criticised, with former India opener Gautam Gambhir saying the batsman has “loads to learn” as a leader.

But Kohli’s consistency, attacking style and supreme fitness levels make him the standout player in this edition of the 50-over World Cup.

Meanwhile, India skipper preferred to highlight the positives from their six-wicket defeat to New Zealand in a Cricket World Cup warm-up on Saturday and was particularly pleased with the performance of the lower order.

Twice champions India slumped to 39-4 in the 11th over before all-rounders Hardik Pandya (30) and Ravindra Jadeja (54) offered some resistance.

All out for 179 in the 40th over, India were then unable to contain New Zealand’s batsmen and a 114-run stand from skipper Kane Williamson (67) and Ross Taylor (71) helped them to victory with nearly 13 overs to spare.

“The one thing we spoke about in a tournament like the World Cup is, you could easily have your top order out for not too many, so the lower order has to look forward to that and I think Hardik batted really well,” Kohli said.

“MS (Dhoni) absorbs the pressure really well and Jadeja got a few runs as well, so I think from that point of view, we got a lot out of this game, which is what we wanted to. The lower order getting some runs that was the biggest positive.”

Kohli said The Oval surface got easier to bat on as the game progressed.

“It’s going to be very different when batting second and we saw that in the later half of our innings as well,” said Kohli, who made 18 before losing his stump to Colin de Grandhomme.