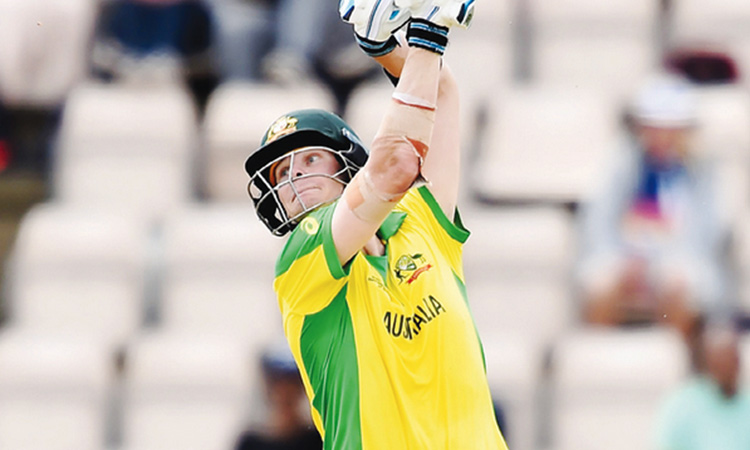 Australia’s Steve Smith hits a six against the England bowling during their warm-up match at the Rose Bowl in Southampton on Saturday. Agence France-Presse

Trent Boult starred with the ball as New Zealand thrashed India in a World Cup warm-up match at the Oval on Saturday. The left-arm seamer exploited overcast conditions and a pitch with plenty of grass cover to finish with four for 33 as India were skittled out for just 179 in 39.2 overs.

Ross Taylor (71) and New Zealand captain Kane Williamson (67) both spent useful time in the middle as the Black Caps won with almost 13 overs to spare.

Earlier, Boult removed openers Rohit Sharma and Shikhar Dhawan for two apiece to leave India 10 for two. Ravindra Jadeja (54) and Hardik Pandya (30) were the only India batsmen to make it past 19.

India captain Virat Kohli fell for 18 to medium-pacer Colin de Grandhomme when the star batsman was clean bowled by a ball that cut back in off the seam as he aimed towards midwicket.

Kohli’s men were in danger of being dismissed for under a hundred when MS Dhoni, the captain of the India side that won the 2011 World Cup, fell to Southee to leave his team on 91 for seven.

India, however, were still bowled out with nearly 10 overs of their innings remaining, with James Neesham taking three for 26.

In Saturday’s other match, former captain Steve Smith powered Australia to a 12-run win over hosts England at the Rose Bowl in Southampton.

Earlier, Smith’s 116 was the centrepiece of Australia’s 297 for nine.

If the sound of Smith and team-mate David Warner being booed was a sign of things to come, England will hope the former Australia captain’s innings is not an omen for a season that includes both the World Cup and a five-Test Ashes series.

Smith and Warner only returned to international duty earlier this month after they both completed 12-month suspensions for their roles in a ball-tampering scandal in South Africa.

Warner was booed first by spectators on Saturday when he walked out to open the innings with captain Aaron Finch after Australia lost the toss.

Warner’s dismissal for 43, caught in the deep by Jonny Bairstow off Liam Plunkett, was greeted by immediate cheers from England fans.

But there were more boos as he returned to the pavilion to be replaced by Smith, coming in with Australia 82 for two in the 17th over.

Long a thorn in England’s side, Smith went to 99 with a superb carved six over third man off Ben Stokes. The next ball delivery saw Smith complete a 94-ball hundred, including eight fours, prompting yet more boos as well as clapping to acknowledge his century.

Smith’s innings ended in bizarre fashion when, off the penultimate ball of the innings, third umpire Joel Wilson ruled he’d been caught and bowled by Tom Curran off what looked to be a bump ball.

Earlier, injury-prone England fast bowler Mark Wood could only manage 3.1 overs before going off with what a team spokesman said was “left foot discomfort”.

The Durham quick then went to hospital for a scan. Meanwhile Liam Dawson split the skin on his right finger, with England saying the spinner would not bat on his Hampshire home ground.

England, fresh from a 4-0 series rout of Pakistan, had gone into Saturday’s match without ODI captain Eoin Morgan after he suffered a finger injury during fielding practice on Friday.