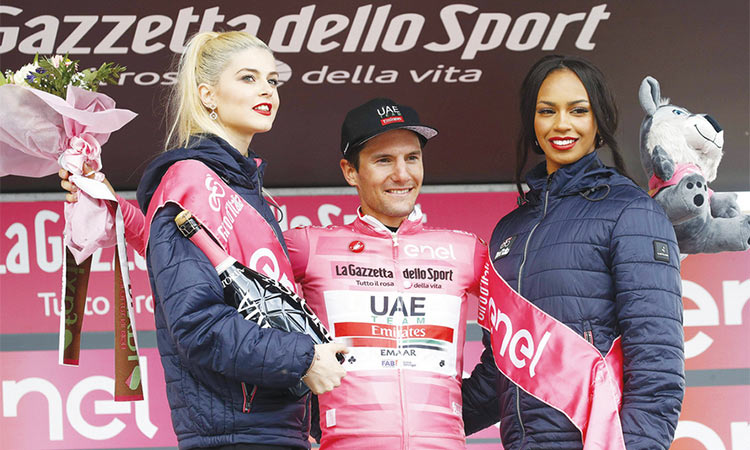 Team UAE Emirates rider Jan Polanc celebrates on the podium after stage 13 of the Giro d’Italia on Friday. AFP

Ilnur Zakarin of Katusha soloed to a snow-capped summit finish victory on a chaotic 13th stage of the Giro d’Italia on Friday that shook up the overall picture.

On this first summit reckoning in a mountain-packed second section of the Giro, the peloton climbed to 2237m altitude, with Zakarin dropping Spain’s Mikel Nieve in the final section and beating him by 35sec at the panoramic finishing post in the Gran Paradiso national park.

Movistar pair Mikel Landa and Richard Carapaz came third and fourth on a great day for the Spanish team as Dutchman Bauke Mollema climbed to fourth in the overall with his fifth place on the day.

The two favourites, Roglic of Jumbo-Visma and two-time Giro winner Nibali of Bahrain, kept close tabs on each other all day with both men taking frequent turns to test each other.

Colombian hope Miguel Angel Lopez of Astana, who was third on last year’s Giro, had been leading that pair until he suffered yet another mechanical cost him precious initiative.

But the day’s biggest loser, over five minutes behind Zakarin, was Simon Yates, a Briton who rides for Mitchelton-Scott, whose pre-race bravado will haunt him after declaring himself the man to beat.

Saturday’s stage looks even tougher with five climbs and 4,000m elevation on the menu. The penultimate climb, the Colle San Marco is 10.5km with an average gradient of 9.8 percent.

The popular 24-year-old Londoner and rising British rider Hart, starting the day 33rd some 11min 49sec off the leading pace, was part of a breakaway on the downhill section of a mountain when he fell.

“Sadly we can confirm that @taogeoghegan has been forced to abandon the #Giro after a crash. He is OK and our team doctor is with him. A full update will follow,” Ineos said on Twitter after their rider left in the team car rather than an ambulance.

Hart won two stages on the Tour of the Alps in April and was sent to the Giro by Ineos after team leader Egan Bernal broke a shoulder in training.

Meanwhile, disgraced former American cyclist Lance Armstrong says he wouldn’t change a thing about the reign of doping that led to him being stripped of his record seven Tour de France titles.

All of Armstrong’s titles between 1999 and 2005 were vacated by the International Cycling Union six years ago.

“I wouldn’t change a thing. I wouldn’t change the way I acted,” Armstrong said in excerpts of an interview with American broadcaster NBC Sports that will air on May 29. “I mean I would, but this is a longer answer.

“If I just doped and didn’t say a thing, none of that would have happened. None of it. I was begging for, I was asking for them to come after me. It was an easy target.” Armstrong has largely been shunned by the international cycling world since being exposed as a doping cheat. He was issued with a lifetime ban by the United States Anti-Doping Agency in 2012.

Having denied the doping allegations for years, Armstrong eventually made a public confession in a television interview with US chat show host Oprah Winfrey in 2013.

“We did what we had to do to win. It wasn’t legal, but I wouldn’t change a thing: whether it’s losing a bunch of money, going from hero to zero,” Armstrong said.