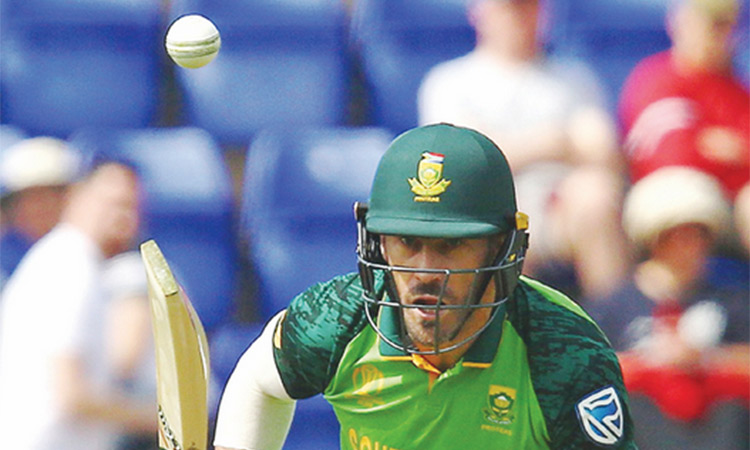 South Africa captain Faf du Plessis says the team’s record of repeated World Cup woes will have no bearing on a largely youthful squad at the 2019 tournament.

Since making their World Cup debut in 1992 after decades of apartheid-enforced isolation, South Africa have won just one of seven knockout matches -- a quarter-final against Sri Lanka in Sydney four years ago.

They have reached the semi-finals four times but have yet to make a final, with a match-winning innings from South Africa-born all-rounder Grant Elliott seeing them beaten by New Zealand in 2015.

And when the World Cup was last staged in England 20 years ago, a dramatic semi-final tie with Australia saw South Africa bow out on net run-rate.

But Du Plessis said that even though he and fellow senior players such as Hashim Amla and Dale Steyn had endured their fair share of World Cup pain, it would not be an issue this time around.

“You can’t control history -- I am a firm believer in that,” Du Plessis said at a World Cup captains’ press conference in London.

“The squad that we have here compared to previous tournaments are a lot younger and with those new faces comes exciting opportunities.”

South Africa have arguably the toughest start to the group phase, which sees the 10 teams all play each other, when they face World Cup hosts and favourites England in the tournament opener at the Oval on Thursday. England have twice broken the record for the highest one-day international in the past three years.

But with conditions promising to be ideal for batting, Du Plessis believes it is bowlers who could yet determine the destiny of the World Cup.

And with an attack led by an outstanding fast bowler in Kagiso Rabada, South Africa could trouble their opponents’ top-orders.

“I think bowlers will win this tournament,” he said.

“Batters will score runs on good wickets, so the team towards the end will be the team that will have done well with the ball -- teams that can take wickets on flat pitches.”

Meanwhile, South Africa on Friday announced the dates for a tour by England which will include four Tests, three one-day internationals and three Twenty20 internationals.

The Test series will start in Centurion on Dec.26, followed by South Africa’s traditional New Year Test at Newlands in Cape Town, starting on Jan.3.

The remaining Tests will be in Port Elizabeth and Johannesburg.

England will play two warm-up matches before the Tests, a two-day game against an Invitation XI and a three-day match against South Africa A. Both fixtures will be in Benoni.

Cricket South Africa chief executive Thabang Moroe said the series would have special significance, “as this will be our first home series in the ICC World Test championship following our away series in India in October.”