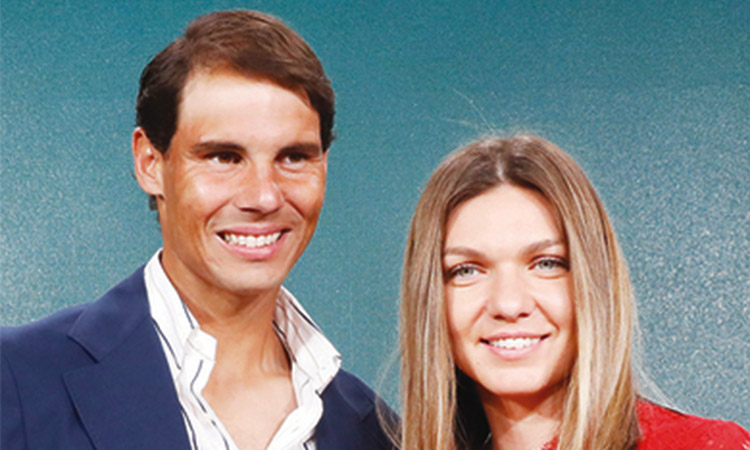 Defending champs Rafael Nadal and Simona Halep pose next to the cups during the draw of the French Open on Thursday. Associated Press

Rafael Nadal said on Friday that he “doesn’t care” if he is the red-hot favourite to lift a record-extending 12th French Open title at Roland Garros, insisting that there are a host of players in contention for the trophy.

Nadal could move to within two titles of Roger Federer’s all-time men’s record of 20 Grand Slam trophies if he lifts the Coupe des Mousquetaires on June 9.

“I don’t care if I’m the favourite,” he said. “I care about feeling well and playing well.

“I appreciate that you (the media) see me like that, but (Dominic) Thiem, Novak (Djokovic), Federer, Tsitsipas who has been playing well, (Juan Martin) del Potro, (Kei) Nishikori -- all those that are the best in the world will be favourites.

“The only thing that worries me is being well and being competitive.

Meanwhile, Federer on Friday played down his chances of winning the French Open on his first appearance at Roland Garros since 2015, saying that title-winning form might not be “in his racquet”.

The 20-time Grand Slam champion missed the French Open in 2016 through injury before sitting out the next two clay-court seasons in order to focus on Wimbledon.

But he will make his Roland Garros return on Sunday with a first-round tie against unheralded Italian Lorenzo Sonego.

Federer admitted that he is unsure of his title chances, but did compare his current situation with when he ended a five-year Grand Slam drought at the Australian Open in 2017.

“(I) don’t know (if I can win the tournament). A bit of a question mark for me. Some ways I feel similar to maybe the Australian Open in ‘17,” the 2009 French Open winner said.

“A bit of the unknown. I feel like I’m playing good tennis, but is it enough against the absolute top guys when it really comes to the crunch? I’m not sure if it’s in my racquet.”

Meanwhile, Nadal and Federer were placed in the same half of the draw for the French Open on Thursday, meaning the two longtime rivals could meet in the semi-finals.

Nadal starts against qualifiers in the first two rounds while 37-year-old Federer, bidding to become the oldest Grand Slam title winner of all time, faces Italy’s Lorenzo Sonego, ranked at 73.

If the seedings work out for the quarter-finals, then 15-time major winner Djokovic would face Germany’s Alexander Zverev who has still to get past the last eight at a Slam.

However, either 2017 champion Jelena Ostapenko or two-time major winner and ex-world number one Victoria Azarenka await in a tricky second round for the 21-year-old Japanese star.

Williams, seeded 10, could face Osaka in the quarter-finals in a rematch of their stormy 2018 US Open final where the Japanese star triumphed while the American suffered a spectacular meltdown. Defending champion Simona Halep, seeded three, plays Australia’s Ajla Tomljanovic in her first round match.