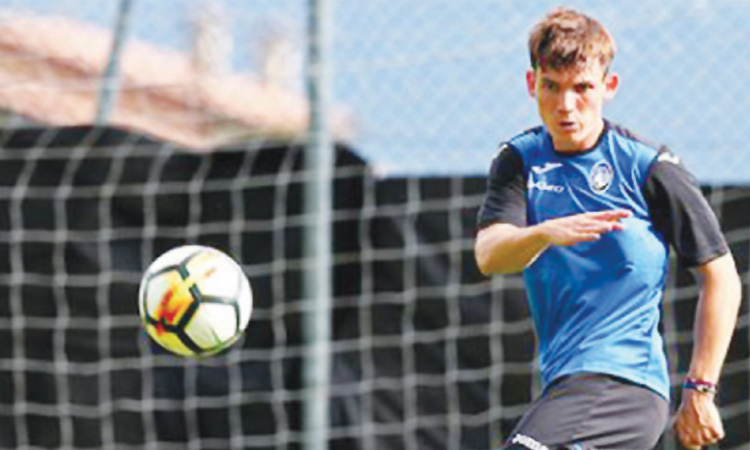 Atalanta’s Marten de Roon takes part in a practice session ahead of their Italian League match against Sassuolo on Thursday.

Atalanta are on the brink of history with a first Champions League qualification in the club’s 111-year history within their grasp in the final match of the Serie A season which they play at home but away to Sassuolo.

The Bergamo side’s own stadium is being renovated and as a result they will play at the Maipei Stadium, which is also the home ground of rivals Sassuolo, and where, if they qualify, they will play the Champions League next season.

Gian Piero Gasperini’s side are one of four teams battling for the remaining two Champions League places on the final day.

Champions Juventus are already through along with second-placed Napoli with just three points separating four teams who are chasing the remaining two elite European berths.

Atalanta are third with 66 points from their 37 games, ahead of Inter Milan on their head-to-head record, with AC Milan fifth on 65 and AS Roma sixth on 63.

Gasperini’s side have not been beaten in the league in three months, earning a crucial point last weekend with a 1-1 draw at Juvenuts.

“The Champions League is the ultimate goal but we shouldn’t think we’re already there,” warned Gasperini. Atalanta are unbeaten in nine straight Serie A game against tenth-placed Sassuolo, and have won the last three in a row.

A win would give Atalanta the club’s first top-three finish in 58 years of Serie A history.

Inter Milan have dropped to fourth after last weekend’s 4-1 defeat at Napoli, and play at home against Empoli, a side fighting for Serie A survival and on a a run of three straight wins.

Coach Luciano Spalletti is under pressure, with reports he is set to be replaced by former Chelsea boss Antonio Conte. But former Roma and Zenit Saint Petersburg coach Spalletti is used to cliff hangers having secured a Champions League return last season at direct rivals Lazio on the final day.