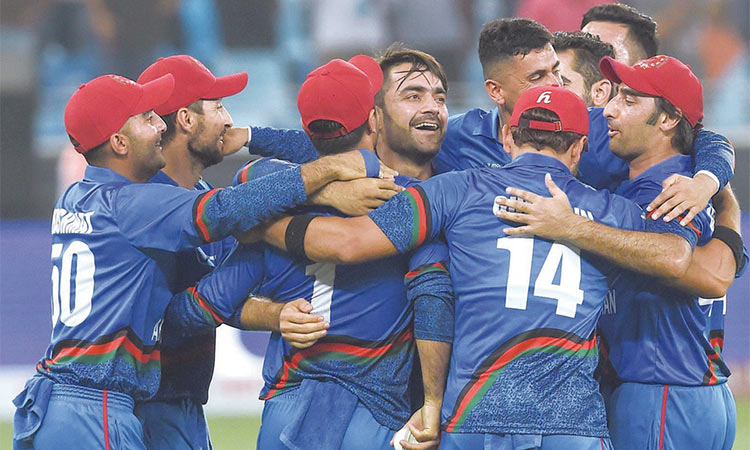 Afghanistan made huge strides at international cricket under Asghar Afghan.

Afghanistan’s World Cup preparations were thrown off kilter when they controversially decided to replace successful captain Asghar Afghan with the little-known Gulbadin Naib two months before the tournament.

Under Asghar, Afghanistan had made serious progress, beating Bangladesh and Sri Lanka at last year’s Asia Cup in the UAE and even tying a game with India at the tournament.

Asghar was confident his spin trio of Rashid Khan, Mujeeb Ur Rahman and Mohammad Nabi could dismantle any team once they had a fighting total on the board.

Seven months later the skipper was unceremoniously dethroned, upsetting matchwinners Rashid and Nabi weeks before only Afghanistan’s second appearance in the global 50-over showpiece.

“With just months to go for such a mega event like the World Cup, changing the captain will cause uncertainty and also team morale will be affected,” said Rashid, who was made Twenty20 captain.

“I don’t think it’s the right time to change the captain before the WC. The team has gelled really well under Ashgar & personally feel he is the right man to lead us,” tweeted Nabi.

Afghanistan’s former coach Kabir Khan said the change could have a negative impact on the team.

“The change is political,” Kabir said. “Had they wanted a change, it should have been done after the World Cup. I feel the change will definitely affect Afghanistan as both Naib and Asghar will be under pressure.”

Kabir, who oversaw Afghanistan’s swift rise as a force in international cricket, is confident that despite the upheaval, the Afghans will not lose their battling qualities.

“I don’t think their fighting spirit will be any less but a new captain will find it tough,” he said.

With the return of fast bowler Hamid Hasan, Afghanistan’s attack has more venom. But their hopes lie with Rashid, Mujeeb and Nabi, who have been the key men in recent years, helping Afghanistan make it through the qualifying competition in Zimbabwe last year.

Rashid, ranked third in the ODI bowlers’rankings and number one in Twenty20 internationals, grabbed 14 wickets and Mujeeb claimed 16 scalps as Afghanistan edged through despite a scare.

But to allow their spinners to wreak havoc, Afghanistan, who face Australia in Bristol on June 1 in their tournament opener, need to put challenging totals on the board.

The emergence of dashing opener Hazratullah Zazai will add firepower at the top of the order alongside stocky Mohammad Shahzad, dropped from the 2015 World Cup for being overweight.

Zazai smashed six sixes in an over in the Afghanistan Premier League (APL) in 2018 and hit the second-highest score in T20 internationals of 162 not out -- including 16 sixes -- against Ireland in February 2019.

The first task though for the new captain will be to rally the troops after the change in command.

Meanwhile,  Sri Lanka go into the World Cup with low expectations after losing eight of their last nine one-day matches and led by a captain who has not played 50-over cricket for more than four years.

While the 1996 champions have enjoyed some success in the Test arena, they have lost more than three-quarters of the ODI matches they have played since the beginning of 2017.

During that period, Sri Lanka have been led by six different captains, the most recent of whom is Test opener Dimuth Karunaratne.

Karunaratne, who is regarded as one of the best batsman in the five-day format, had not been part of Sri Lanka’s ODI set-up since the 2015 edition, largely because of his low scoring rate in limited-overs matches.

With the team’s top order having routinely proved fragile during the series against South Africa in March, the solidity Karunaratne offers as opener has proved attractive to team selectors.

In his first assignment as Test captain, the 31-year-old led Sri Lanka to a 2-0 win in South Africa, to make the islanders only the third team after Australia and England to win a Test series there.

But the skipper would have to preform a near miracle to make his team into serious contenders for the biggest prize in ODI cricket.

The left-handed Karunaratne re-started his ODI journey with a bang after scoring 77 off 88 balls to guide his team to a 35-run win over Scotland via the Duckworth-Lewis method on Tuesday.