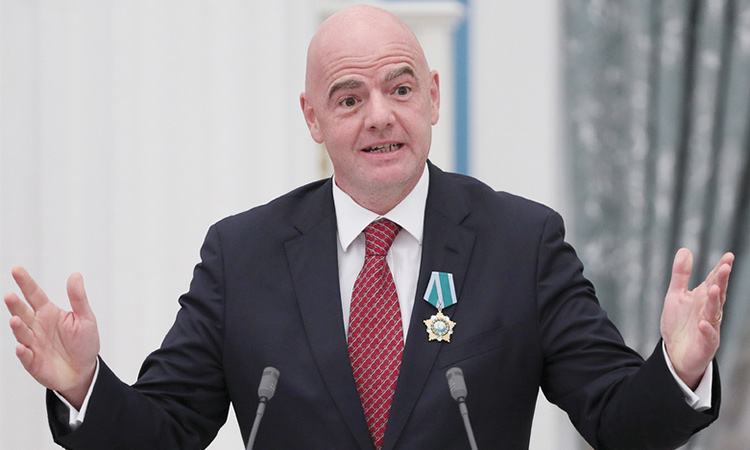 FIFA President Gianni Infantino delivers a speech during an awarding ceremony at the Kremlin in Moscow on Thursday. Reuters

FIFA shelved a proposed expansion of the 2022 World Cup in Qatar to 48 teams on Wednesday, dealing a blow to the world football body’s president Gianni Infantino.

Infantino had proposed expanding the tournament and explored the idea of adding additional host nations.

The 2022 tournament in the Gulf state will now be played with 32 nations taking part.

FIFA said it had abandoned the expansion plans “following a thorough and comprehensive consultation process” which led to the conclusion that “under the current circumstances such a proposal could not be made now”.

“(The tournament) will therefore remain as originally planned with 32 teams and no proposal will be submitted at the next FIFA Congress on 5 June,” FIFA said in a statement.

The expansion was a pet project of Infantino.

Specifically FIFA was counting on an additional $120 million in TV rights, $150 million in marketing rights and $90 million from ticket sales.

The news comes after Europe’s top football clubs said in March they would boycott an expanded 24-team Club World Cup -- also backed by Infantino -- which is planned to take place in June and July 2021, replacing the Confederations Cup tournament.

An announcement of the final decision had not been expected until next month’s FIFA Congress to be held in Paris ahead of the women’s World Cup that takes place in France between June 7 and July 7.

FIFA said it had examined the possibility of Qatar hosting a 48-team tournament on its own, but a study “concluded that due to the advanced stage of preparations and the need for a detailed assessment of the potential logistical impact on the host country, more time would be required and a decision could not be taken before the deadline of June”.

FIFA has dropped the plan to expand the 2022 tournament despite recommending in March that the number of teams should be raised to 48 for that tournament, ahead of the 2026 World Cup in the United States, Canada and Mexico.

Expanding the competition for the 2022 tournament was always a complicated proposition. FIFA had sounded out potential co-hosts in the region willing to support Qatar. Qatar’s Supreme Committee, charged with the organisation of the tournament, said in reaction to FIFA’s decision that “Qatar had always been open to the idea of an expanded tournament in 2022 had a viable operating model been found and had all parties concluded that an expanded 48-team edition was in the best interest of football and Qatar as the host nation.”

But it said there was insufficient time to make a deeper assessment before the June deadline and “it was therefore decided not to further pursue this option.”

“With just three and a half years to go until kick off, Qatar remains as committed as ever to ensuring the 32-team FIFA World Cup in 2022 is one of the best tournaments ever and one that makes the entire Arab world proud,” the Supreme Committee said.

Khelaifi, who is also the boss of Qatari television channel BeIn Sports, has been under investigation since March in connection with the bidding process for the 2017 and the 2019 world championships.

Another BeIn executive, Yousef Al Obaidly, a PSG board member, is also under investigation by French justice over the awarding of the 2019 worlds to Qatar.

Doha lost out to London to stage the 2017 worlds but beat off opposition to host this year’s event from Eugene in the United States and Barcelona.

Khelaifi was informed of his “mis en examen”, a French legal term that has no direct equivalent in the American or British legal systems but roughly translates as being charged, by letter. He was unable to attend a May 16 court hearing as he was in Qatar for the Cup final.

The French term does not automatically trigger a trial but means that prosecutors believe there is strong or corroborated evidence of wrongdoing.

The magistrates are looking specifically at two payments of $3.5 million in 2011 by Oryx Qatar Sports Investment, a company jointly owned by Khelaifi and his brother Khalid, to a sports marketing firm run by Papa Massata Diack.