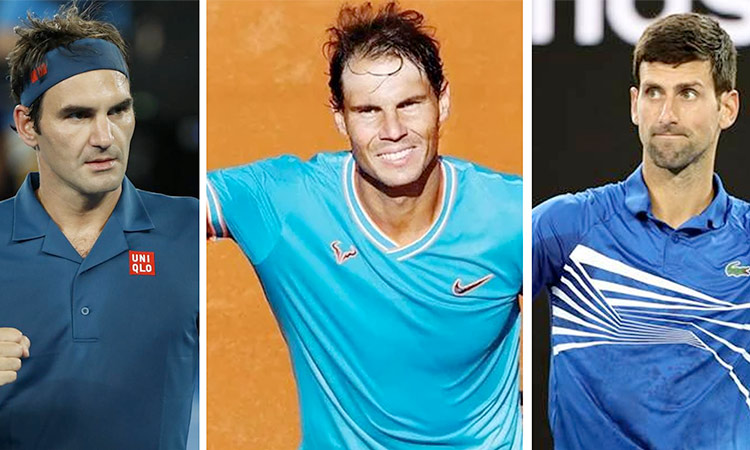 However, a returning Roger Federer and rejuvenated Rafael Nadal will once again stand in his way.

World number one Djokovic completed his first private stranglehold of all four Slams with victory at Roland Garros in 2016.

Having clinched the 2018 Wimbledon and US Open titles and then a seventh Australian Open crown in January this year, the Serb is tantalisingly close to another ‘Djoko Slam’.

Federer and Nadal, with 20 and 17 career Grand Slam titles each respectively, may be ahead of 15-time major winner Djokovic in total hauls and have also completed career Slams.

However, not even Federer or Nadal have managed to hold all four of the sport’s greatest prizes at the same time.

Djokovic, who turned 32 on Wednesday, is playing down his potential date with destiny even if it would put him halfway to a 2019 calendar Slam of his own.

After losing to Nadal in the Italian Open final last weekend, the Serb was in no doubt that it was the Spaniard who would likely be celebrating a 12th Roland Garros title in a little over two weeks’ time.

At Roland Garros in 2018, Djokovic was shocked by Italian journeyman Marco Cecchinato in the quarter-finals, a defeat which was such a crushing bodyblow that he even contemplated skipping Wimbledon.

Federer is returning to Roland Garros for the first time since 2015 having turned his back on clay court tennis to focus on Wimbledon.

This year marks the 10th anniversary of his one and only Paris triumph and should the 37-year-old defy the odds and clinch the 2019 title he would become the oldest Grand Slam champion of all time.

Federer saved match points to beat Gael Monfils in Madrid and in Rome against Borna Coric, he found his feet again on European red clay.

Nadal, whose record at Roland Garros stands at a staggering 11 titles and a win-loss record of 86-2, claimed a ninth Italian Open title and a record 34th Masters on Sunday.

Meanwhile, Serena Williams heads into this year’s French Open as an outsider for a Grand Slam title for possibly the first time in 20 years, with questions surrounding her fitness after a poor start to the season, while Naomi Osaka needs to rediscover her best form to solidify her position at the top of the women’s game with a third straight major crown.

The 37-year-old Williams is still waiting for a record-equalling 24th Grand Slam triumph, with her last victory coming at the 2017 Australian Open shortly before taking a break from the sport due to pregnancy.

She impressed initially after returning, but last year twice fell just short of drawing level with Margaret Court’s mark, losing in the Wimbledon final to Angelique Kerber before her infamous meltdown en route to another final defeat by Osaka at Flushing Meadows.

Williams’ 2019 campaign has not gone to plan so far, with a series of injuries seeing her manage just four matches since her Australian Open quarter-final exit to Karolina Pliskova.

Also, world number one Osaka has not been overly struggling since surprisingly splitting with coach Sascha Bajin in the wake of her Australian Open title.

But the Japanese star has not won a title since, and like Williams, withdrew from the Italian Open through injury before her quarter-final against Kiki Bertens.

Reigning champion Simona Halep will enter the tournament somewhat under the radar with much of the focus on Williams and Osaka, but the Romanian remains the world’s most consistent player on clay.