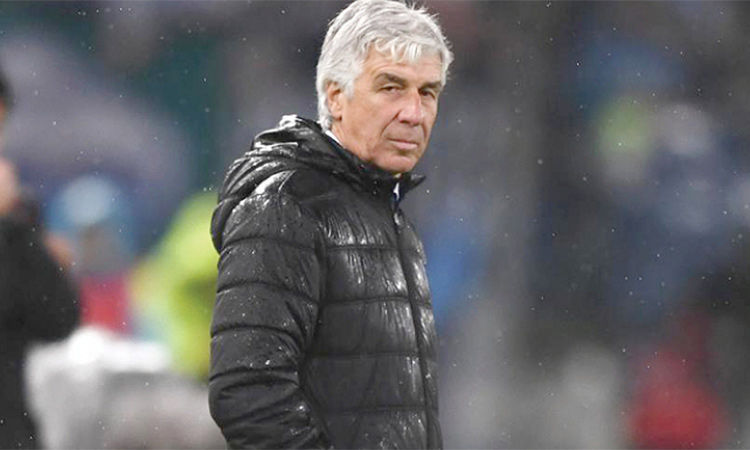 Atalanta coach Gian Piero Gasperini said that their high confidence is going to be crucial in the tie against Sassuolo. File / Agence France-Presse

Atalanta, facing one of the biggest matches in the club’s 112-year history, will be playing away at home on Sunday as they bid to pip one of the two Milan teams to a place in next season’s Champions League.

The Bergamo team’s own stadium began rebuilding work this month and they are playing their final home matches of the season at the Maipei ground in Reggio Emilia — which happens to be the home of Sassuolo, their opponents on Sunday.

Around 18,000 fans are expected to make the 240-kilometre trip from Bergamo for what could be an historic evening for their team who have never previously played in the Champions League, or its predecessor the European Cup.

The remaining 4,000 places will be reserved for Sassuolo fans — in the away sector.

Atalanta are among four teams chasing the remaining two Champions League places on the final day of the Serie A season while, at the other end of the table, Fiorentina are among three sides trying to avoid the last of the three relegation spots.

Atalanta, Serie A’s topscorers with 74 goals, are third with 66 points from their 37 games ahead of Inter Milan on their head-to-head record, with AC Milan fifth on 65 and AS Roma sixth on 63.

Juventus won the title with five matches to spare and Napoli have guaranteed second place.

“Our confidence is now sky high and that is going to be crucial,” said Atalanta coach Gian Piero Gasperini after his team held Juventus 1-1 away last Sunday to extend their unbeaten league run to 12 matches.

“The Champions League would be extraordinary, but we mustn’t think that it’s already in our grasp.

Inter Milan’s confidence, on the other hand, is at a low ebb after they were thrashed 4-1 at Napoli last Sunday. They now face an Empoli side who are themselves battling to avoid the drop and have three successive wins behind them.