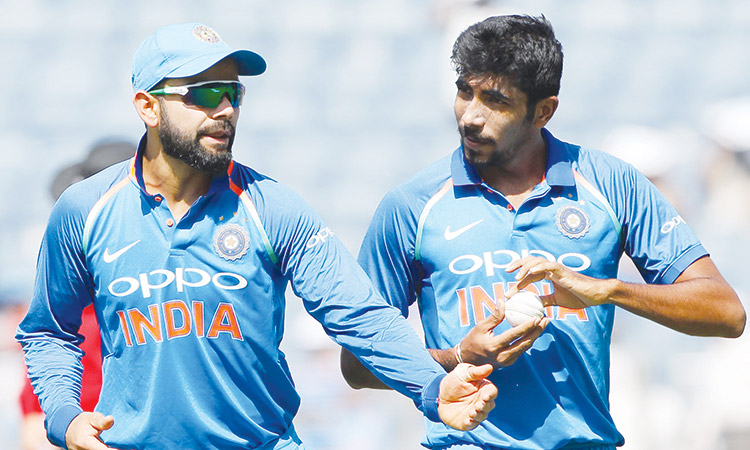 India boast the game’s undoubted superstar batsman in Virat Kohli but their bowling attack, led by World No.1 ODI bowler Jasprit Bumrah, could be the most important factor.

India boast the game’s undoubted superstar batsman in Virat Kohli but their bowling attack could hold the key to their hopes of World Cup glory.

Despite their status as the game’s global powerhouse, India have only won the showpiece tournament twice, in 1983 and 2011.

But Kohli’s men, second behind England in the one-day international rankings, will start the tournament in England and Wales among the favourites alongside the host nation and defending champions Australia.

For all the focus on captain Kohli, the number one batsman in the world in the 50-over format and Test cricket, the ability of India’s seamers to exploit the conditions could be the most important factor. Jasprit Bumrah, the top-ranked ODI bowler in the world, leads the pace battery alongside Mohammed Shami, Bhuvneshwar Kumar and Hardik Pandya.

Former India skipper Rahul Dravid believes the tournament could be a high-scoring affair.

“I believe, having experienced some of the conditions in England last year with the A-team tour, it would be a high-scoring World Cup,” he told Star Sports.

“And in a high-scoring World Cup, having bowlers who can take wickets in the middle will be very important. I think India is lucky in that regard.

“People like (Jasprit) Bumrah, Kuldeep Yadav and Yuzvendra Chahal.... (India have) got bowlers who can take wickets.”

The 25-year-old Bumrah, with his ability to bowl yorkers at the death, has picked up 85 wickets in 49 ODI matches since making his international debut in January 2016.

Yadav and Chahal did not have a great Indian Premier League season but have played an important role in India’s recent successes.

And former India batsman Sanjay Manjrekar told AFP that the spin twins could have a crucial role to play for India, who kick off their World Cup campaign against South Africa in Southampton on June 5.

“In T20 cricket if you don’t have anything in the pitch for these spinners then the batsmen, by slogging them, have a tendency to get the better of these guys,” he said.

“In the 50-over World Cup, in the middle stages, that kind of pressure won’t be there on these two guys.”

Kohli, 30, has scored more than 19,000 runs across all formats of the international game and shone during India’s tour of England last year, despite defeats in the Test and ODI series for the visitors. But the rest of the batting line-up appears far from settled, with Lokesh Rahul and all-rounder Vijay Shankar vying for the number four spot after Rohit Sharma, Shikhar Dhawan and Kohli in the top three positions.

Kedar Jadhav and M.S. Dhoni are expected to form the core of the middle order.

“I don’t think the Indian batting looks settled. Virat Kohli is the only guy that gets me very excited,” said Manjrekar, who admitted Dhoni’s IPL form had been good.

All-rounders Pandya and Shankar will also be crucial to India’s chances of making the final four in the round-robin event.

An attacking middle-order batsman, a medium-fast bowler and quick in the field, Pandya has the abilty to turn games single-handedly.

The 25-year-old Pandya, who earlier this year was suspended over sexist remarks on a TV chat show, is fresh from winning the IPL title with Mumbai Indians and keen to focus his energies on his first 50-over World Cup.

“There is no one even close to Hardik Pandya’s talent with both bat and ball,” former India opener Virender Sehwag told cricketnext website.

Meanwhile, despite dominating the headlines in the last year with his consistent show, England batsman Jos Buttler considers Kohli as the ‘form batsman going into the showpiece event.

Speaking to IANS, Buttler not only professed his admiration for Kohli, but also revealed how the time he spent with former Australia skipper Steve Smith during the IPL (playing for Rajasthan Royals) helped him learn about the amazing work ethics of the batsman who is hungry to show the world what they missed while he served a 12-month ban after the Sandpaper Gate in 2018.

“Both obviously amazing batters, I first time saw Steve up so close this IPL, it was a great experience to watch him go about his practice and his work ethics. As for Virat, we all know what a fantastic player he is and has been. He is probably the ‘form batsman’ for the last 12 months in the world. Two fantastic players, very different styles, but both very impressive,” he said.